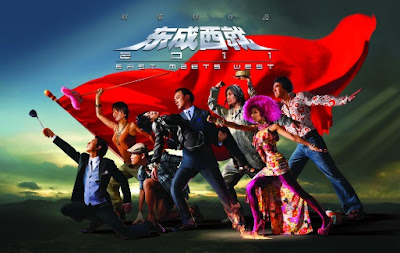 This Jeffrey Lau comedy is, I'm told, a sort of sequel to his earlier Eagle Shooting Heroes. Whether you like it is going to be your guess as good as mine. If you love wild Hong Kong comedy with wild garish characters and action you're going to love this. If not this is going to play as rather stupid film. Even though I like the style of comedy, and I am a fan of several of director Lau's films I'm not a fan of this film.

The plot of the film has a bunch of desperate characters, who are really gods who have forgotten they are gods, coming together to defeat one of their number and thus gain the ability to go home. At some point they remember who they are and essentially turn into a defacto superhero group.

While I like Jeffrey Lau's films like Chinese Tall Tale, The Chinese Odyssey films and Treasure Hunt, I haven't really liked anything after Tall Tale with his Kung Fu Cyborg being particularly disappointing.

Here the film is a manic attempt at being a "superhero" comedy sort of like what would have happened if Mystery Men had been played even sillier, had blood, and stupid dime store masks. It was too stupid for me, and by an hour in I was ready to hang it up.

In fairness in researching the film I found some people who loved the film. I also suspect that in a less tired and more silly mood I would be less inclined to say I hate this film. (And I reserve the right to change my mind if I see it again and like it)

The choice is yours, if you are in the mood for Chinese superhero nonsense go for it otherwise skip it.
Posted by Steve Kopian at July 01, 2012