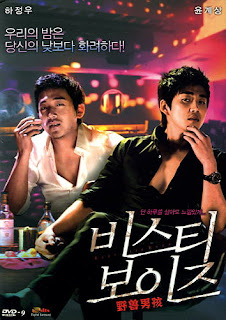 Just a quick reminder that Tuesday is the next Korean Cultural Service screening at the Tribeca Cinemas. It’s the second of the two Yoon Jin-Seo films, Beastie Boys.

My apology about not having a review for you all but I and the rest of us at Unseen Films have been hip deep in the New York Asian Film Festival and Japan Cuts so we’ve fallen down on the job.

The press release for the screening describes the film as follows:

The once-affluent Seung-Woo (k-pop superstar Yoon Kye-Sang) is now relegated to serving female customers at a host bar - a late-night job that dangerously flirts with male prostitution. When his encounters with the lovely Ji-Won (Yoon Jin-Seo) turn into more than just a customer-host relationship, the realities of his job quickly rear their ugly head. Meanwhile, his drunk, gambling-obsessed boss Jae-Hyeon (The Chaser’s Ha Jung-Woo) is causing his own complications and, when every problem suddenly collides – Seung-Woo discovers it’s going to take more than just street smarts for him to come out this job unscathed.

As always doors at 630, movie at 7 and its free on a first come first serve basis st the Tribeca Cinemas (54 Varick Street, on the corner of Canal Street, one block from the A, C, E and 1 train Canal Street stops)
Posted by Steve Kopian at July 19, 2012