I began the day by seeing Rufus from cineAWESOME. Rufus is the operations manager of the festival and one of the programmers. I was happy to see him since I wanted to tell him I liked the shorts program he put together. He offered to tell me about the short film I missed but I declined because based on how he was talking about it I realized it was a better film to see than hear about. He then scooted off to do festival chores and I went and got my seat. 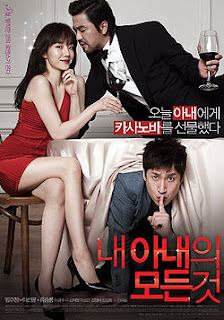 First up was All About My Wife. The film is a remake of a Chilean film called A Boyfriend for My Wife. The film is a romance about a man with a high maintenance wife. After seven years of marriage he's ready to leave his wife, but in order to avoid alimony he wants her to leave him. To help push his wife out the door he makes a deal with a neighbor who is a Casanova to have him seduce her. Its a nice idea but it has lots of unexpected complications.

Said by Rufus to be one of the higher rated films of the festival, this is a super little romance. It's a nice balance of comedy and drama, with a romantic triangle that is probably the most real feeling one I've ever seen in any movie. It's one of the rare times where you really don't know who she's going to end up with since either choice ultimately is a good one. 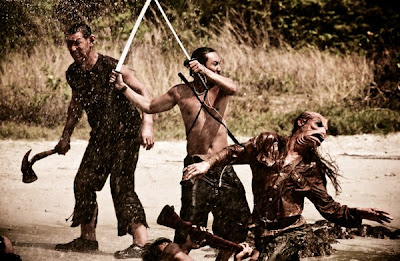 The second film was Dead Bite.

Dead Bite is a a horror film made by the members of the Thai rap group Gancore Club. Its as weird fever dream of zombie insanity...

The film has the band fleeing a concert that was unknowingly set up for a bunch of ghosts. In order to make up for it their manager books them on a gig that will have them frolicking with Playboy models on a boat. The problem is the boat runs out of gas and they are forced to pull into Mermaid Island...which happens to have a crazed cult running around, plus zombies that come out of the water every time it rains...and there are monsters...and mermaids...

This is a weird ass mash up of about 15 different genres that is damn near close to a home movie. Its the sort of twisted film that a bunch of drunk or stoned film fans might come up with. In many ways it doesn't work. In many ways it does. Its a film that just goes for it and strangely I think we're better for it.

Forget logic this film really doesn't have any, it just throws things at us. Its funny one minute and horrifying,  the next. The zombie monster attacks are bloody confused affairs probably closer to what anything like that would be. They are uncomfortable to watch because they have consequence. People die horribly.

Is it a good movie? Beats me. I loved a lot of it, but some of it doesn't work and several sequences go on way too long. I would have loved if they hadn't done the film themselves and brought in real horror filmmakers...on the other hand what works here is the atypical stuff. The best thing I can say is its absolutely worth trying... You may not like it, on the other hand you might.

And with that I headed home.

And that's where I'm going to leave it. I'm beat. More happened today, including another chat with Rufus about next year (?) and an argument with someone over last night's Golden Slumber. I have two more days at the festival the Japan Society this weekend so expect more reports.
Posted by Steve Kopian at July 11, 2012