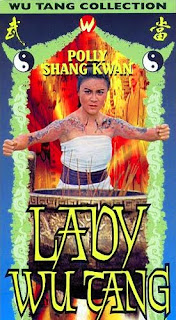 Over the top WTF martial arts movie that is among the most amazing things you'll see because it's so out there. It doesn't make a lick of sense and frankly you won't care because its just so much fun.

The plot has a girl training in the martial arts going after several stolen volumes of martial arts wisdom. I'm going to leave the plot there because you won't believe me if I told you what was going on- weird training methods, flying fighters, limbs that grow and shrink, weird tests of worthiness...

I saw this and my mouth hung open in complete disbelief... Its one of the weirdest and wildest martial arts films I've ever seen. I think it's got everything you can think of in it but romance and spaceships.

I picked this up in a multi-film DVD set expecting to buzz through most of the films, which is what frequently happens in this 5 buck buys. First movie out of the box I was hooked.

Its so wild I stopped the second film to watch this again.

Check your bargain bins and pick this baby up