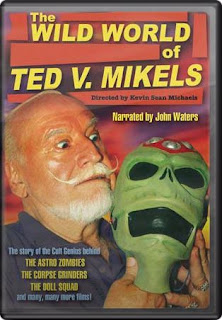 Harmless biography and appreciation of Ted V Mikels and his out put of films that is narrated by John Waters.

Mikels is a legendary schlock miester who specialized in films like The Undertaker and His Pals, Corpse Grinders (1 and 2), Astro Zombies, 10 Violent Women among others. Sure his films range from pretty good to utter garbage (most of his recent films fall into that category) but at the same time you have to hand it to the man for continuing to plug away at the age of 81.

Mikels is a jovial man who turned his love of performing into a film career and a house full of beautiful women (Hugh Hefner has nothing on this guy).

This film on the man and his movies is an enjoyable way to spend an hour (the DVD release lists the running time as two hours but I think that includes the deleted scenes). Its full of clips, interviews with the man and his women (including legendary Tura Satana –who really needs a film made about her) who talk about the movies and how they were made.

Heavy its not. Its more a pleasant diversion about a bunch of movies that are likewise a diversion.

Worth a look if the subject interests you.
Posted by Steve Kopian at July 27, 2012