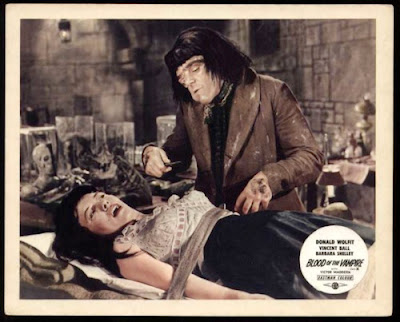 The one enduring image from this film that has haunted me across the years is the weird hunchback assistant to the villain. Its an image that was splashed across horror magazines of my childhood. There was something about the twisted fellow with an eye that drooped to his cheek that made you want to see the movie. I never saw the film as a kid and it wasn't until well into my adulthood that I managed to see the film. I can't say I was disappointed.

The plot concerns Dr John Pierre who is wrongly thrown in jail. He is redirected to the asylum/prison run by Dr Callistratus so that John Pierre can help Callistratus with his experiments concerning blood. As those outside the prison attempt to free him through legal means Pierre is forced to deal with the strange goings on in the prison, including fending off the sadistic Carl, the hunchbacked assistant of Callistratus.

Gothic, and grandly over the top in the way that most of the Hammer films weren't this is a cheesy but fun attempt at copying the Hammer Studios formula. It looks and feels very much like Hammer in it styling and plotting (Then again Jimmy Sangster of Hammer wrote the script). Shot in color, the print I saw was well worn and a bit faded. I wonder how this would have looked at the time of its original release. It must have looked great. I loved the sets which were done in such a way as to give the illusion of space, unfortunately it turned every location into spaces the size of football stadiums (though in several sequences things were much too cramped).

The whole thing reminded me of the sort of thing you used to run across at 2am on late night TV with too many commercials. Actually as much as I liked the film I do think it is a bit plodding and probably could have used either trimming or a commercial break or two.

Strangely this film is very difficult to see. I'm at a loss as to why this film has fallen through the cracks over the last 40 odd years. Its not a bad movie, though it is a tad creaky and of a style they haven't done since Hammer stopped making movies. Perhaps its simply a matter of falling between the cracks in finding a distributor (it was not done by a "major producer"), or more likely the fact that there is no vampire with wings and fangs as promised in the title. What ever the real reason its a shame because this film is worth a look. (The film is out on DVD if you look for it, but even so it still seems MIA)

If you like Hammer style horror or good but rarely seen films, search this one out and give it a try. Its certainly worth a bag of popcorn on a Saturday night watch movies.

(An aside: Albert Finney's character in The Dresser is based upon Donald Wolfit, who plays Callistratus.)
Posted by Steve Kopian at July 09, 2012