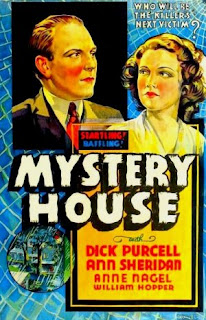 One of the last in a series of films that began with While the Patient Slept in 1935 about a nurse Sara Keate and her boyfriend, Lance O'Leary who gets involved with murder. The series was based upon a series of novels by Mignon G Eberhart. I'm not if this film is the penultimate film or if its the final film. Either way this film and Patient in Room 18 (which will be reviewed later today) put the series to rest (Though both are quite good). Both were released by the Warner Archive as part of the Horror Mystery Double Feature set.

As near as I can figure there are four films in the series and two additional films that are based on stories with the characters but which are not part of the unofficial series.

The first film was While the Patient Sleeps. This had O'Leary and Keate as the main characters.

This was followed by Murder of Dr Harrington and Murder by an Aristocrat which were based on Eberhart stories with O'Leary and Keate but changed all the names.

The Great Hospital Mystery with Keate and O'Leary wandering in and out among the characters, but not taking front and center.

After that the series got a double shot of Keate and O'Leary films in 1938, with both of today's films coming in rapid succession.

This time out a rich family facing financial difficulty goes away for family meeting. After delivering sobering news the patriarch is killed, the police say suicide, but we know and many suspect murder, a fact made clearer as more bodies begin to turn up.

Ann Sheridan, plays Sara Keate our heroine who is taking care of the the wheelchair bound matriarch. Top billed Dick Purcell is Lance O'Leary who is brought in to investigate what is really going on.

A break with all of the other films in the series since this film is set not in a hospital but in a hunting lodge. The film is essentially your typical old dark house story but with a few twists best left for you to discover.

I like the film. I really like the characters of Keate and O'Leary, however I think that stripped of the hospital setting Keate is left to flounder. This film is really a Lance O'Leary with with the normally stalwart Ann Sheridan getting lost in the background. Its not Sheridan's fault, it the story which sadly gives her almost nothing to do.

Definitely worth a look see, especially as part of the Warner Archive collection where you can watch this and Patient in Room 18 in rapid succession.
Posted by Steve Kopian at July 04, 2012