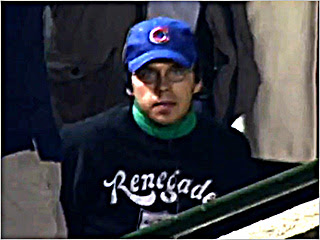 Alex Gibney’s Catching Hell is a great film. I missed it when it premièred at the Tribeca Film Festival last year and only managed to catch it on Oscar night 2012 when it ran counter to the awards ceremony on ESPN.

How good is it?

It not only washed away any thought of watching the awards ceremony, but caused my dad to stop noodling with his computer to sit down and watch it with me.

The film concerns the story of Steve Bartman, who was unlucky enough to deflect a foul ball in game 6 of a league championship series that might have landed in the glove of Moises Alou and ended the inning. What happened after that was a complete collapse of the Chicago Cubs that lead to their losing a chance for the World Series. While its clear that Chicago lost thanks to their own mistakes, Cubs fans put all the blame on Bartman who was physically threatened and received death threats.

This is a great film that takes one small event and then spirals it out into something more. This is the story of a city that went crazy and blamed a (nerdy looking)fan for the complete collapse of their favorite team. It's a frightening look at the mob mentality and the general need to scapegoat. It's also a look at how we all believe in some sort of supernatural explanation for the order of the universe (it's completely irrational that one non-player can affect what happens on the field.)

I would hate to think what would have happened if Bateman had been caught by the rabid mob.

My heart bleeds for Bartman, a nice seeming fellow who did what many other fans wanted to do, but who's attire and post failed catch demeanor made him stand out of the crowd. His life was wrecked simply because too many people can't see that baseball is only a game.