Guns &Roses, Shorts, Golden Slumber and Din Tao or DB can't remember what day it is at NYAFF (spoilers)(and revised)

What a long day it's been. As I write this I'm in the house for 20 minutes from all day at the NYAFF . It started with my getting up normal work time thanks to a body clock that didn't know I was taking the day off.

While I had breakfast I watched the documentary Last Days Here about the lead singer of the band Pentagram. Its a really good film, that deserves a post of it's own, but not here since it has nothing to do with Asian film.

After lunch with one of my brothers I headed over to Lincoln Center. Once there I talked to Goran Topalovic one of the founders of the NYAFF and I believe the only one I had never ever spoken to before. It's weird, despite going to the festival for years I never managed to talk to him. He's like everyone else who runs the festival, charming and extremely nice. I really would love to sit down with him and interview him about how the festival is really put together. He told me some of it and if I can get him to tell stories you will gain a huge degree of respect for what goes into running the festival. 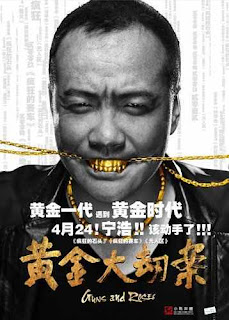 GUNS AND ROSES is the new film from Ning Hao, the director of Crazy Racer. Nominally a caper comedy the film concerns a thief who is thrown into jail during World War Two for robbery. He meets a revolutionary being tortured and leaves the prion with the other man's clothes. It transpires that inside the shoes is information about a Japanese gold shipment. This puts him in contact with the revolutionary's cohorts.

A wildly uneven film with a script that occasionally just jumps to things, special effects that are a tad too CGI, a lead character that's hard to root for (he is a low life) and tonal shifts that can make you feel bludgeoned this is film that will thrill some and annoy others. I liked the film, but I found it's last half hour of blood thirsty bleakness (which was in a way fore shadowed) is the sort of thing I don't need visit again. Yes the end affected me but I also felt a tad worked over as I was forced to wonder is this a caper film or The Wild Bunch 2

Yet again a film at the festival leaves me feeling beaten up....

The second screening of the day was the Korean Short Film program.

Okay first up I need to take the festival organizers to task here. What math were you using when you timed the program out? No offense guys but you list it as 90 minutes, but even allowing for a restart of one of the films and the prize giveaway the films ran longer than advertised. I wouldn't have cared but I, and a couple other people had to bolt before the end to run across the street for the sold out Golden Slumber screening.

Anyway 5 films were screened I saw 4 of the five (I missed Finis Operis, which may have been a good thing since one person I asked about it said "I don't what the hell that was other than weird")

NIGHT FISHING is Park Chan-Wook (Old Boy) and his brother's film made on the iPhone. One of the best proofs of how you can use cheap digital means to make a film when you have talent I've seen. This is a haunting film about a man who goes fishing and finds a dead girl. What is really going on I'll leave for you to see since the film, for a long stretch seems to unrelated, when in reality it's not.

HEART is a visually stunning battle between various human-like creatures for a heart. Its a marvelous mix of visuals and music.

THE HIDEOUT concerns a woman who goes to an Internet cafe to file a story and finds herself potentially in trouble with three strange guys, one of which is wearing an ankle bracelet to track his whereabouts. I didn't much care for it since I felt it took forever to get where it was going, and even then it's not much of a pay off.

THE LUCKY GUMBOY is a long shaggy dog story about a weird kid who comes to a school and is able to blow huge gum bubbles. It makes him a hero. I dare not say more since it's all in the payoff (maybe possibly)

As I said I didn't see the last film since I had to dash across the street to see the sold out screening of GOLDEN SLUMBER.

Sitting in my seat I was pleasantly surprised to see Hubert Vigilla from Flixist wander in. He is, as when I first officially met him Saturday at the Donnie Yen interview, a gentleman and a scholar. He also let this over tired reviewer babble on at him, which was overly kind.

Golden Slumber is about the Cambodian film industry which was wiped out when the Khmer Rougue came to power. Exacerbating the the loss was the fact that many of the films only had a couple (as in two) prints, so if they were lost they were gone.

I would love to report that it's a great film, but it's a snoozer. Sorry guys, I admire what you're trying to do, and I understand that you are trying to replicate the loss of the films by only having a fleeting glimpse of some of the surviving films at the end (30 out of 400 exist),but the stories don't mean a whole hell of a lot since we don't have points of reference...

...speaking of which the films biggest flaw is that unless you know what happened in Cambodia and to its population, you're going to have a hard time following what exactly they are talking about. Honestly had I not been watching John Pilger's films about Cambodia after the Khmer Rouge I'd have been lost.

Don't get me wrong I love what the film is trying to do but it's either wildly rambling in it's story telling and way too artistic in it's cinematography with at least 15 too many gliding shots.

Sign me up to see the surviving films, but please give me back the 100 minutes I lost to this film.

It's too much the product of a filmmaker who is WAY too close to his subject. 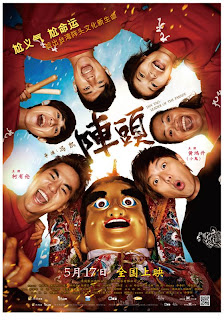 Din Tao:Leader of the Parade was a film I almost missed. Tired and burnt I seriously considered skipping it. I then decided to go figuring I could leave close to the end and catch an early train. However the amazing Mr C showed up for the screening so I ended up hanging to the end.

The film is the story of a bunch of misfits in a Din Tao (ritual drumming) group. They end up in a battle with a rival group when the son of their founder returns to the fold. Taking charge he has them travel around Taiwan carrying the drums on their backs. This gets attention from the media and causes all the tensions to heat up.

This feel good film is a feel good story unto itself since the director and producer wouldn't give up on the film and turned it into one of the Asian hits of the year.(The first box office take in some theaters was a single ticket)

While it's based on a true story (some real life footage plays over the end credits) the film hits many of the typical plot lines for a story like this...and many that aren't with many twists seeming really right. I really liked the film a great deal, with the only flaw in my book being the fact that the film feels short even at 125 minutes with plot points and character back story seeming to have ended up on the cutting room floor.

As I said to Mr C I'm going to pick it up when it hits a cheaper DVD than an import.

Okay it's 222 as I finish this time to spell check and go to bed. I have two movies tomorrow and an errand or two to do before hand.