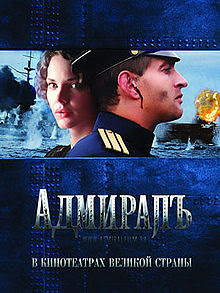 Visually resplendent biography of Admiral Alexander Kolchak who went from leading his men in the First World War to leading the White Russian opposition to the communists. The film is centered on his romance with poetess Anna Timireva.

Beginning with some of the most amazing sea battle sequences of recent vintage, this film literally starts with a bang. I was blown away by the opening battle sequence which occurs as Kolchak is laying mines, only to run into a much larger and heavily armed German battleship. Unable and unwilling to surrender, the smaller ship begins to sting the larger one and then do the unthinkable, lead it into the minefield which they just laid. It made me sit up and take notice.

The battle sequences are only a small part of the story, since we follow as Kolchak meets and falls instantly head over heels with Timireva. She is smitten too, and when she gives him a love letter he says they must never meet again. She asks why and he simply says "Because I love you". Actually it leaves out the fact that they were both married to other people.

From that point on we watch as Kolchak and Timireva weather the storm of the Russian Revolution and the civil war that followed. Its not entirely happy tale and it's one that doesn't have a happy ending. Indeed the Soviet displeasure with the principals extends to the modern day framing device which has Timireva working as an extra the massive Soviet film of War and Peace. The director is battling to keep Timireva in the film, which is something the authorities don't want feeling her mere presence with corrupt audiences.

I really liked this film a great deal. Sure it can be like a soap opera at times, but most of the time it's great romance/historical film that shines a light on a period many people don't know. And as I said it's just a great romance.

Definitely worth tracking down.
Posted by Steve Kopian at July 20, 2012