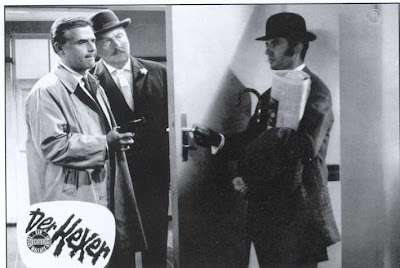 German version of the often filmed Edgar Wallace story called the Ringer. I saw another version of this story a few months back titled The Gaunt Stranger, which was a nifty little film. Here we have the story redone as part of the cycle of Wallace films and its been updated to the 1960's. The plot has the criminal known as the Ringer returning to London to get revenge for the death of his sister. the police want the Ringer for long ago crimes and know that he is not one to be trifled with. As the Ringer zeroes in on his target, the police attempt to figure out who the ringer is, he's been too long from London and no one knows who he is, except his wife and she isn't saying. A good version of the story it pales in comparison to the Gaunt Stranger which was so good that even when you figured out what was going on you doubted that you were right. Here things are more amusing than anything else and you're only hope to know who the Ringer is was to see an earlier version. Recommended if you run across it, but not something to search out. 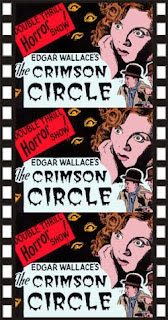 Another in the German Wallace cycle involving multiple murders and blackmail as the result of an execution that went wrong seven years earlier. Good but not great this film never really added up to much more than people moving around trying to figure out who the villain was and to stay far enough on his good side that they didn't end up dead. To be honest while it isn't a bad movie, its quite good, its very generic as these things go, blending so much into the mass of German Wallace films that I started to nod off towards the end. Its not the fault of the film entirely since I am under the weather, but at the same time I kind of allowed my self to drift because I sort of felt I knew where it was going. Worth a look on Late night TV or if you are in an undemanding mood.

Both can be had from Sinister Cinema
Posted by Steve Kopian at July 21, 2012