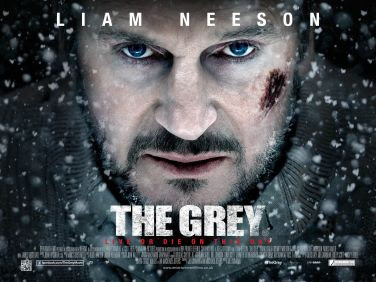 Great adventure film was (rightly) advertised as a more action packed film than it is (no one would have gone otherwise). Yes this is an action packed film, but at the same time it's something else entirely, a metaphysical examination of men in the wild. Its a brother to Runaway Train.

The plot is simple, a bunch of men heading back from the oil fields in Alaska survive a plane crash. Among them is Liam Neeson, a hunter in the employ of the oil company. Neeson has boat loads of issues, which he manages to put aside because of the need to simply survive. Things become complicated when they realize that the wolves in the area sense an easy meal.

I'm being obtuse. I'm being that way on purpose because I can't explain what the film is with out giving away a few of the meager plot points. In away the less you know the better the film is. It also helps if you don't go in expecting a balls to the wall survival story but expect a film that manages to be about the Neeson character and a bunch of ideas that creep in to things thanks to great story telling rather than idle chatter.

You have to watch this film. This is a film with limited talk, but has a great deal going on if you are willing to watch what is happening.

Many of my friends have placed this on their best of the year list, and quite honestly it's hovering close to mine. It really is that good a film.
Posted by Steve Kopian at July 11, 2012