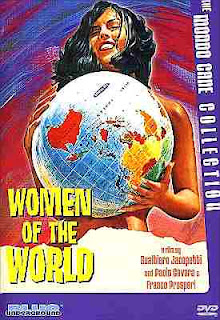 The third film from the makers of Mondo Cane is a look at women around the world.

The print that's part of the Mondo Cane box set is beautiful to look at. Unfortunately it doesn't have the promised Peter Ustinov narration. I should also point out that the subtitles are incomplete and there are moments where the narration is not translated, not a problem if you're watching in English, it is a problem if you are watching in Italian.

The film itself isn't bad. It shows women around the world doing differnet things, focusing mostly on cheese cake stuff. Its not a bad document of women in the early 1960's around the world, but its not one thats really revelant to anything. I'm not certain it ever was.

Watching it I had the feeling of "yes and?". Its not bad, but I couldn't really understand why I was watching it simply because its just women doing things with narration. The pseudo purposes of most mondo movies is gone and only the cheese cake remains.

Its not a bad film, just one thats rather pointless....

Should you get the chance to watch it you can give it a shot. If you're in the right mood it might be a pleasant time killer that may teach you something.Or if not its two hours of eye candy...
Posted by Steve Kopian at July 26, 2012