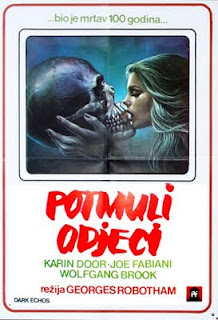 This is a review of a film I wrote a while back about the film Dark Echo. At the time all I knew about the film was it was Balkan and made in 1986. Information has since come to light to indicate it was made in 1977...though I have no idea where since one person at IMDB (where one  of two eaarlier versions of this appeared) says Austria or Hungary, but the actual IMDB entry say Yugoslavia

Video Search of Miami listed the film as one you'll never find in reference sources and until they laid that challenge down you didn't. Between the time they offered it for sale and when I bought it, it appeared on IMDB.

The movie was tonights offering...

Its a strange European film co-production made in English by two Balkan countries. It concerns the return of a ferry captain from the dead to get revenge on the decendants of the people who had laid blame on him for the ferry accident in which he died along with 86 other people. There's no question he's doing it since you see him during the opening credits.

The film isn't bad. While it's by no means scarey or even tense, it is interesting, the sort of film they don't make any more... or even when it was made, which was 1986. I would have sworn it was made no later than say 1981 or 1982 and more probably in the late 1970's. This is after all a movie about a zombie in a rubber mask and a pea coat going around killing people in a nice quiet mountain village.

Who made this film and who thought they could release it in '86? I have no idea. This had to be somone's idea to make a quick buck,but I can't see this being made as late as 86 unless the people involved were cmpletely out of touch with world wide trends. Unless of course it was made earlier but sat on the shelf until someone thought they could do something with it. The clothes lead me to believe that was the case. This is a movie that even in say 1982 was on the edge of being eclipsed by films like The Thing or Friday the 13th and any of the gore films. This is mostly a gore free movie, except for a rather badly done mid-head decapitation- watch where the axe hits the head and watch where the head comes apart...they are not the same place... nor is the monsters head ever the same size....

This is in its way a rather sweet movie. Possibly too sweet and nice and gentle... which is an odd thing to say, its as if the film makers didn't want to really scare you. If it wasn't for the blood it could be a a kids film.

Do I need to see it again? No, no I don't. However it would make an excellent double feature with Spirits of Jupiter another lost drive-in horror film from the early 80's. All I need now is some popcorn a few friends and a game to play while watching and we're set....