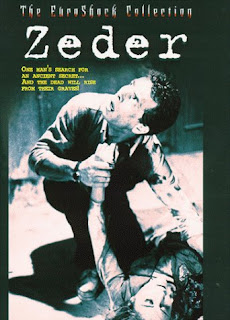 They call it a zombie movie but its not really. Its a creepy little thriller.

The plot of this film has a guy running down what was previously typed on a typewriter (he looked at the ribbon to see what the person before typed) and ends up dropped in the middle of a rather strange mystery about places where time stops and the dead come back...

I had read about this in the Italian Zombie movie book and was intrigued. When I happened upon it used at a cheap price I picked it up. It was a good purchase.

This is a film with no real gore. Its a film that builds through atmosphere and through twisting circumstances. Its one of those movies that makes you feel uneasy. You know it doesn't make sense but you have to keep watching because there is someething about the internal logic that demands it, you watch it even though your skin is crawling and you're shifting uneasily in your chair.

No its not the best horror film ever made, but its a damn good one. One I wouldn't hesitate to recommend to anyone who wants a decent thriller. Trust me, as some one some what versed in and tired of what is called typical Italian horror, ie films that make no sense and which are very gorey, Zeder is a breath of fresh air.

If you're in the mood for something off beat and unexpected in your horror films I'd say rent Zeder, you could do a hell of alot worse...

And for those pondering the Pet Semetary angle...both this film and Stephen King's book appeared at about the same time.
Posted by Steve Kopian at July 11, 2012