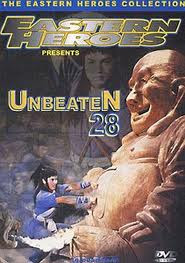 When his father is killed a baby is raised to be a martial artist with the aim of eventually getting revenge.

Wild over the top training sequences fill much of the film as our hero goes through hellish trials before he gets to fight, briefly the man who killed his father and adopted father.

Unevenly dubbed, filled with many of the cliches that wuxia lovers go crazy for (like over the top wire work) this film is an absolute joy. Its exactly the sort of film that everyone makes fun of and yet its also the sort of film that people curl up with. There is simply something wonderful about watching the weirder and weirder tests that our hero has to go through. Teracota robots, floors that make noise, twin warriors? They're all here and more.

Don't look for logic and reason, simply look for some guys fevered dream of a martial arts.

Out on DVD in a variety of packages
Posted by Steve Kopian at July 28, 2012