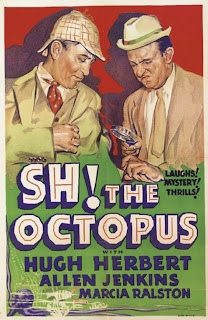 I've been going through the Horror?Mystery Double Feature Box from the Warner Archive and having a blast. One of the films is one I saw ages ago on Turner Classic. Instead of writing a new review I'm reprinting my IMDB review:

Two detectives find themselves on an island looking for a murderer and instead find that they are entangled with a super criminal called the Octopus and a real live giant octopus. Much confusion occurs.

Amusing but totally nonsensical "mystery" based upon a stage play of some sort (I would love to read it at some point). Clearly something was lost in translation since the story now transpires in a scant 54 minutes and makes as much sense as a Goon Show episode by Spike Milligan. Twist piles on twist and red herring follows red herring as great deal that is foreshadowed never happens or is changed to become something else.

I do like the film I just wish that it didn't have all the ear marks of a comedy mystery since there is plenty of comedy but ultimately no real mystery. There is tension aplenty and there are a few sequences that create a nice sense of suspense and perhaps even terror (the late game revelation of the master criminal creeped me out) but the film falls apart in the end as being much ado about nothing. Its a shame since the cast that includes veteran stalwarts like Allan Jenkins and Hugh Herbert are up to the material or would have been had there been some material.

Worth a look so long as you don't expect anything other than the craziness that's happening right in front of you.
Posted by Steve Kopian at July 05, 2012