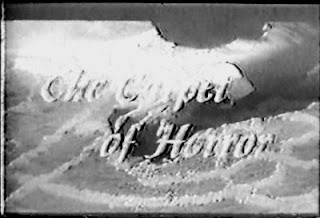 Badly titled film concerns a killer who rolls balls filled with poison across the carpet to kill unsuspecting victims.

Very much akin to the Bryan and Edgar Wallace films that Germany was also cranking out at the same time, the films plot is put in motion as the police and various other groups try to get to the bottom of a criminal enterprise with a mysterious leader who is keeping the group together with blackmail.

On the negative side the film is pretty interchangeable with most of the similar films making it not particularly memorable (outside of the really bad title).

On the positive side it’s an entertaining mystery that keeps you watching, and guessing to the end. Its exactly the sort of thing that will keep you up all night if you stumbled on it at bed time(which is what happened to me) or would be the perfect way to spend a rainy Sunday afternoon.

Recommended. Currently out from Sinister Cinema.
Posted by Steve Kopian at July 17, 2012