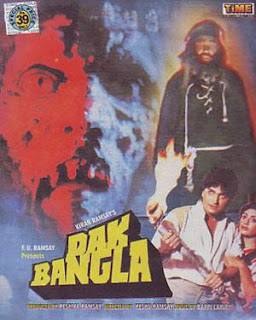 I have to say at the outset that my impressions of this film are filtered through two limiting factors. First I saw this with out subtitles so other than the odd snatches of dialog in English I had no idea what was being said. Second I had never, until I saw this film, seen a Bollywood film from start to finish (I've seen several since then).

The main story, and there's a couple of side plots, has to do with a man and his wife who take a job as caretakers at a place called Dak Bangla. This is a big mansion house which the neighbors don't like much because weird things are going on there. Once there weird things start to happen to them. Before long they are visited by some female relatives and one of the girls boyfriends. In investigating the place the girl with her boyfriend find a large book which explains the history of the place and about the creation of a mummy. Eventually the mummy gets loose and the nastiness ensues.

My reaction to this movie was, at first, "this is pretty good". The horror elements are handled extremely well and had there been released in the US this probably could have made a bit of money with the horror crowd. Its very much like the low budget horror films of the 1970's and 1980's, with a few Euro-horror twists from the 1960's thrown in. The horror parts of the film I really liked.

The problem is that this is a Bollywood production so there are some weird asides. Romance, comedy and music all come into play and they take away from the main thrust. I may seem like a cultural heathen, but while I was prepared for the "misplaced asides" I didn't think they would be this distracting. There is a disco dance number with a guy who looks like Elvis. Another number, with a seeming S&M overtone comes right after what looked to be a rape. "A song, now?", I thought. It boggled my mind.

As I admitted earlier I know I lost a great deal by not speaking the language. All of the humor was gone, as was any real understanding of what was really going on. While this is a movie you can watch without knowing the language, you do lose all of the details as a result.

I liked it, I didn't love it. I did enjoy it enough to know that were I able to get a subtitled or English dubbed version I would certainly try it again.
Posted by Steve Kopian at July 10, 2012