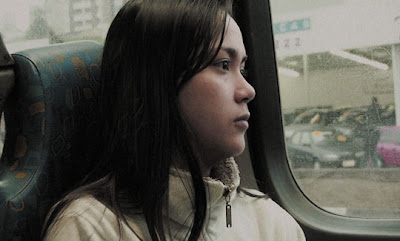 Its not that I haven’t seen it, I have, rather in the form I saw it, the film is a mess. Whether this is the result of the screener I saw the film on or the film itself I’m not sure. I suspect that it’s the largely the technical aspects of the film.

The film is the course of approximately two and a half years in the lives of five Brazilian Japanese, five young adults who live in Japan and have parents or a parent who came to Japan from Brazil in order to earn money in the factories. The kids are kind of adrift since their duel nationality has them as outsiders in the eyes of many Japanese. Indeed they are not required to go to school and many dropout in junior high to work in the factories. When the economic bubble burst in 2008 and 9 they were the first to be let go. The kids feel they belong in Japan, and not where their parent came from since they either left those countries as a children, or they were never there. The film plays out as a kind of universal tale of poverty and migrant workers who don’t really have a place where they feel they belong. Visually the world they in habit here could be anywhere in North or South America since other than everyone speaking Japanese there is no difference.

There are some colorful characters here and some of their stories are often heartbreaking and oddly hopeful, the trouble is that the film is a tough slog. The film seems to have been shot on a variety of different video cameras with the result that some of the hand held camera moves result in weird distortion in the image through much of the early parts of the film. Based on what is said in the film, the film started almost randomly with the filmmakers falling into the Brazilian community and they started to film. This is good because they film has a very much you are their cinema verite feel, but at the same time the feeling more frequently crosses over into feeling like someone’s home movies. Even over the course of the almost 3 years of filming the footage never feels like anything more than assembled home video. Sadly things never get beyond a thrown together feeling. There is a great film here it just needs a different editor to go through all the footage and put it together.

As you can see I have issues with the film technically and it’s organization. But at the same time I fully recognize that the material itself, the stories told in the film are very good and worth hearing. They deserve to be heard and seen, they just need to be seen in a better forum than this, much like a great painting needs a great frame, this a Rembrandt of a story needs something better than a 99 cent store frame.

The biggest problem with the film is the subtitles: They SUCK.

I mean they are an absolute jumble and mess. Its not a translation problem, rather it’s a problem with how they arranged. Much of the film has a commentary/narration that appears only in the subtitles which runs at the same time as the film is translating what the characters are saying.  Even though the narration is in yellow and the dialog is in white the resulting  collision of alternating lines makes it hard to balance what you are reading and seeing since its often like reading two books literally at the same time. Facts and figures mix with talk of regular life. It’s a mess and seems to be an indication of a deep seated problem with the organization of the film since the film which is throwing too much at you from the get go.

There is a good film here, no there is a great film here, it just needs to be restructured and resubtitled... and until that happens I can't in good concious review this film.

(It also needs to do something about at least mentioning the Nikkei laws which were put into place to get rid of the unemployed immigrants by paying them to go home and never come back. )
Posted by Steve Kopian at July 28, 2012