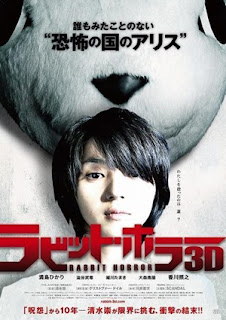 The final film for me from this years New York Asian Film Festival was Takashi Shimizu's wildly off the mark Tormented (aka Rabbit Horror 3D). I'm so glad that the infinitely better Monster's Club and Potechi (Chips) followed it so that the festival could end on a high note because quite honestly this film is one of the very few low points. (Apologies to Stewart who came with me, I swear I didn't know!)

The plot of the film begins with a young boy killing a rabbit in misery. He's then tormented by his classmates, and his only friend appears to be the mute librarian....who just happens to be his sister. We then watch as the boy is pursued by a stuffed rabbit and a person in a rabbit suit... But wait there is a twist coming that resets the table and makes you throw up your hands...until yet more twists confuse matters so much that when the end credits rolled I said "What the hell was that?" out loud to everyone in the theater.

Its a big hot steaming pile of rabbit poop.

Christopher Doyle's cinematography looks great(and I'm sure this was cool in 3D). The actors are fine. The script was absolute pretentious twaddle.

I don't care who Takashi Shimizu is and what he's done before (the incredibly excellent Ju-on films) this one makes no sense even internally. Logic, dream, deranged or otherwise it makes zero sense.

You can't keep changing the table to create tension when what you're doing to begin with makes no sense.

Note to Goran: You asked me what were the two or three films I couldn't believe you guys programmed over the past 11 years- This is one of them.

Why did you run this?

I know, the director.

Stop that. Just stop that. Don't do that. Run the movie because it's good not because the director has been in the past.

I and Stewart tried to.

This is one of the least at the film festival.

And with that the festival was done.

Japan Cuts is just starting but NYAFF is done.

As I write this MrC is at the Japan Society finishing up the festival. But for me it's all done.

A summation and all of that will follow in a day or so once Mondocurry and MrC finish taking stock.

Thanks to Goran, Rufus, Samuel and the rest for inviting us along. While they aren't looking forward to next year, I am.

(And a shout out to Alec from Flixist and Mike from Fangoria. Hopefully I'll catch up with you guys at Japan Cuts)
Posted by Steve Kopian at July 16, 2012

Email ThisBlogThis!Share to TwitterShare to FacebookShare to Pinterest
Labels: horror, japan, japan cuts 2012, not worth the effort, nyaff 2012, wtf