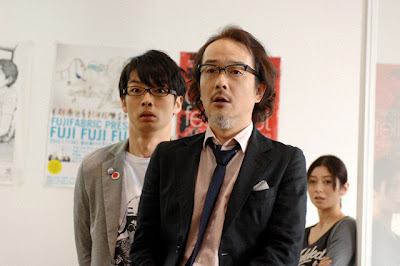 One of the closing films at this years New York Asian Film Festival, its also one of the first films at Japan Cuts.

The story of a 31 year old nebish, who suddenly finds himself the object of interest by a four different women. Pegged as a virgin by those at his new job, he feels like a loser until one day, via Twitter he makes friends with someone out in the world. He thinks it's a guy, instead it's a beautiful young woman. Completely taken aback and unsure of what to do he falls head over heels in love. Unfortunately love never runs smooth, she has a boyfriend...and he's starting to collide with other women...

Driven by the music which takes various forms, from background music, to karaoke numbers, to performances by performers in the film (our hero covers music festivals), to full blown song and dance numbers this film moves at the speed of sound.

There is much to love in this wonderful little film, from real characters who create real emotions, to the great music, to the fantastic visual style (I love the web page end credits) most of the film is an absolute delight.

The trouble is the script which seems to be missing something. Characters come and go. There are times when I felt like I missed something. How did we get here? I know this is based on a four part manga, which, based on my research is different than this film. It's also based on a 12 part Japanese drama which seems to be closer to the film. I'm guessing that the script for the film skips over things that followers of the TV show or manga would know. It's not a fatal flaw, however it did keep me from falling head over heels for the film.

Yes you should see it. The characters and especially the music are wonderful.

Playing July 14th when star Masami Nagasawa will receive the Star Asia Rising Star Award (with an after party) and July 21 (with no party) at the Japan Society
Posted by Steve Kopian at July 01, 2012