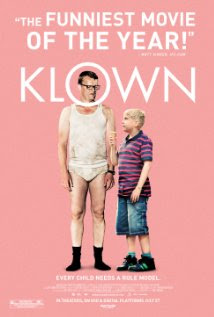 What would happen if Dogma 95 crashed into say The Hangover (which I still haven't seen but that isn't the point)? What if  Lars von Trier made a road movie but went sit-com-esque?

This wild Danish film, which I first noticed when I saw the poster was in the program book for the New York Asian Film Festival, is much funnier than I ever thought possible. It's also very touching and frequently uncomfortable

Before I get started, if you have kids of an impressionable age don't take them to see this because this is a frank, occasionally graphic film  will make you uncomfortable if they are watching this with you. Trust me on that. There's sex drugs and rock and roll here and littleof it is for kids.

The film has Frank taking his girlfriend's nephew, Bo, on a canoe trip. Frank doesn't really want to but he's just found out his girlfriend is pregnant and he wants to prove he'll be a good dad. While the canoe trip unto itself would have been fine, it was supposed to be a carnal trip with Frank's friend Casper with the idea that they were going to pick up women along the way. Things quickly go down hill as we end up with men being boys and complications that are the result of drugs, alcohol, and lust.

I laughed at the jokes and I laughed at the wrongness of it all. I laughed because what happens is funny and despite many of the bits making me feel uncomfortable. This is very much a film that could never be made by a big US studio, or most of the small ones either simply because the material is handled a bit too frankly for some watchdogs (who I'm sure do similar things away from their office) and because there is full frontal male nudity (which wigs some people out).

If you are an adult and can handle what many would call tasteless comedy (though I would argue it's not so much tasteless but rather more like the way people really behave) feel free to see the film.  All others stay away.
Posted by Steve Kopian at July 24, 2012