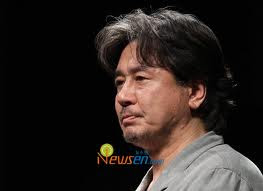 I did not go to the screening of Old Boy that started the day . I've seen it recently and as much as I like the film, I can't see it too many times.

I got to the  theater about 40 minutes before the first  of my shows. I as hanging around waiting to be let in when the doors opened and the crowd started to spill out. Everyone started to fill the lobby and the gallery, more so  once Choi Min-Sik wandered into the gallery for some photographs. The crowd went politely crazy trying to get pictures and autographs before he was whisked off. They needn't have worried since Grady Hendrix said  that Choi was insisting on staying in the lobby so that he could sign and get photographs with whomever wanted them. That's a class guy (but there is way more to the story) later on.

Pang Ho-cheung's First Attempts was sparcely attended...which means the vast majority of you missed one hell of a great presentation. (Seriously this was a hell of a lot of fun) Consisting of three short films, two that the director did back in the 80's when he was 11 or 12 plus a film he made when he was 25. The films were shown with some commentary by the director.

This was a blast. It was a director explaing why and how he started making movies and why his films like Vulgaria and Love in the Buff are so good.

The story goes that Pang's mom got a video camera (which still works) so she could record herself lip syncing and dancing to songs.(We saw an example of this) Her kids were the camera men. They eventually rebelled insisting that they make a movie of their own. Mom agreed but she would have to be the female lead.

The first film they made was called Bank Robbery.It's the story of a bank robbery, and was shot in the family living room with his brothers and mother in the cast and his mother friend shooting the film. It's a charming 5 minute film that an Italian critic over praised as showing the injustice of British colonial rule. (from an 11 year old?) Editing was done by backing things up and reshooting what didn't work.

Over the next couple of year Pang learned how to use multiple VCRs for editing and went so far as to use footage from real films, particularly those with Chow Yun Fat. The result of this was Three Gangsta Bears, a strange film that mashed up several plots of Chow's films and even lifted some footage. The result is a wild trippy film (that ran much longer than it did here since Pang originally included making of segments and out takes in the film).

Its clearly a kids film but it has some truly bizarre sequences like the handing off a number of guns that seems endless, and some lines that might have made sense in Chinese (There's a banana over there make yourself comfortable)

Pang said he realized that he was really a frustrated film star who couldn't get work because no one in films looked like him. He was steered into directing when he realized he could yell and scream at people and then have affairs with starlets.

The film portion of the talk ended with Summer Exercise,a film he made when he was 25, about a little kid who didn't do his summer homework. Deciding to kill himself, he changes his mind only to decide to kill his teacher...the end is a kick in the ass. It's way cool.

After that there was a brief one question Q&A which was cut way short since the 50 minute presentation was at 70 minutes and showing no signs of stopping.

Pang was asked his advice for people wanting to make films and he said to just do it. The technology is there so do it. He said no matter what happens keep going and don't stop. Talk to the audiences and find out what worked and what didn't. He added that learning to make films the way he did forced him to plot and plan what he was going to do which made him a better filmmaker. He said most filmmakers today don't do that, they shoot lazily with no thought.

After the presentation a things were set up for Five Fingers of Death MrC and Mondocurry returned to the theater and were joined by Chocko. 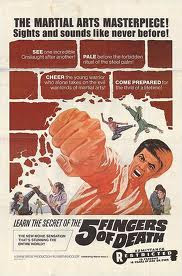 Before the film director Chung Chang-Wha was given the Star Asia Life Time Achievement Award. Considering that Five Fingers changed films as we know it (it along with Bruce Lee were responsible for the rise of martial arts films outside of Asia) it was a well deserved award.

The film tells the story of a martial arts student who is sent to study with another master. There he ends up in the middle of a battle of martial arts schools. Does it make any sense? No. Is it really cool? Hell yea. It's also really bloody and it has peoples eyes being plucked out. It's the prototype of almost every similar film that followed. (The film is so influencial that a recent remastered DVD has a commentary track with Quentin Tarantino.)

If you've never seen it you really must. Yes it's silly, frequently for the wrong reasons (and because it's now cliche), but its also a damn good movie. The fights are great and the characters are the sort you love to cheer or hiss.

After the film Chung Chang-Wha came out and did a Q&A. Moderated by Film Comment's Gavin Smith it mostly talked about how he ended up leaving Shaw Brothers because he was given a producer who was trying to cut the budget in stupid ways, like smaller costumes and props.

Chung Chang-Wha also took great pains to explain that Five Fingers was made before Bruce Lee took things into the stratosphere. The film was not made to mimic Lee's films since it was made at the same time or even before.

He talked about how the fact he studied Chinese in school (the director is Korean) helped him make movies in Hong Kong, however he regrets not studying English since he now resides in San Francisco.

On the way out of the theater we were directed straight outside. The gallery was being used for a cocktail party for Choi Mi-Sik. Both Mondocurry and I had turned down an invite because we figured we really wouldn't get to speak to the actor.

As we stood outside the theater, waiting to meet up with Mr C and Chocko, Mondo and I watched as Choi Min-sik strode out and had a smoke. Everyone on the HUGE line for the next movie Nameless Gangster(which Choi starred in) seemed oblivious to his being there. Eventually people started to go over and talk to him...no one on the line, just the handful of us hanging out and killing time in front of the theater.

Mr C went over and got some pictures...Then Chocko came out and asked where C was

"Over there getting stuffed signed"

I pointed to where a couple people were standing including C.

"No way..." Chocko looked but couldn't see anything because the actor was bent over. However when he stood up Chocko said "Damn!" dropped his bag and began fumbling through it. C offered him a marker but Chocko produced a huge silver one and wandered over.

About this time, give or take, Earl came out with his friend (who's name I have completely forgotten, sorry). Earl and was hoping to have a quick bite to eat before the next film. Unwrapping his Subway sandwich he was completely unaware of the minor commotion going on a few feet away.

I am not sure what happened exactly but Earl suddenly realized that the commotion near us had to do with Choi. Seeing the actor, realizing who he was, and where he was, just hanging out with no one around, resulted in a perfect spit take, but with a hunk of sandwich. With a shriek of "Oh WOW!" he was off running to get his DVD... When he came back he wandered over to get his autograph. Mc C followed close behind with his camera so he could record the moment.

Cigarette break done Choi Min-Sik strode back into the throng in the cocktail party, having made the day of about ten fans in away that none of them could ever have imagined.

I can't say enough nice about him. While I didn't meet him, I'm a fan but I didn't need to meet him, he was extremely nice to everyone who did.He was as kind and as gracious as I've ever seen. Lots of times I'll see celebrities hustle off but he seemed to be there for his fans as long as they were there. He just took his time and simply was.

Watching him interact with people, despite not speaking English, was one of the highlights of the festival.

And with that I'm off until next Saturday, however Mondocurry, Mr C and Chocko are not, so expect reports from the road.

Also a huge shout out to the mad mind behind Bullets over Chinatown. It was a pleasure.

But first one of Chocko's Photos which I've stolen: 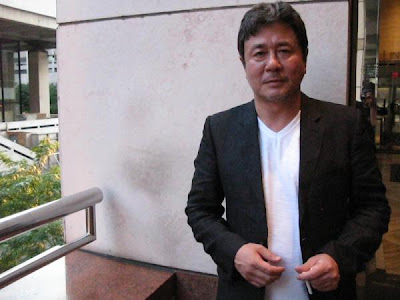