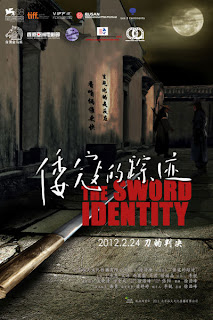 I mention this because the first time I saw it under less than optimal conditions, I saw it on a less than ideal screener. When I was done I wrote up the following review but with a long intro on the screener itself.

Feeling that I was reacting more to the screener and not the film (not to mention being, goaded by Inde Wire’s pick as a must see) I watched the film again under better conditions. The result was that my feelings for the film haven’t changed and in fact have grown stronger. Here, minus my discussion of the screener is the original review. 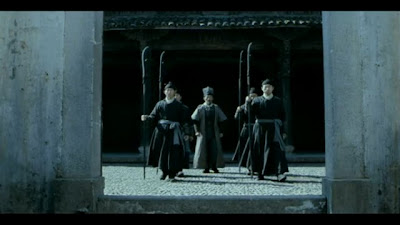 Two ex-soldiers (one a bodyguard for a deceased general who has fallen out of favor) wander into a village and take on the soldiers stationed there. One of the men is captured, the other is runs off with a cryptic statement that if he beats the four masters he can start a new school. The authorities in the town spread the rumor that the two men are Japanese pirates which mean there is reward if he's caught. As the man who got away tries to free his friend, the authorities try to capture him.

Striving for a sense of realism (there are no super feats or wire work) this is an incredibly dry blackish comedy about martial arts versus real warfare and the pomposity of leaders. Actually the film is so dry in it’s humor that I had to double check that it really was a “comedy” since there are no jokes as such just situations that may or may not make you smile or chuckle… or not. I smiled a few times, I may have chuckled once, mostly I had the sense that it was trying to be way more clever than it was managing to be.

The term that kept running through my mind was a martial arts art film, except that there isn’t that many bits of martial arts. Mostly this is a long and winding obtuse tale that seems to want to be realistic in it’s fights despite having frequent unrealistic turns of plot. Things don’t really make a whole of a lot of sense until you realize that the whole point is that the two guys are trying to set up a new martial arts school, hence no one is really dying and that people out to stop them are trying to protect their turf. Its not much to hang a nearly two hour film on.

It’s not a bad film, it’s just an over reaching one. It’s a film that wants so much to be about something, it ends up not really being about anything. It’s the sort of film that you get to the end and you’re left to ponder, That’s it?

By this time you do understand that I saw this under less than ideal circumstances. You also know that I stayed all the way to the end. I didn’t get up and leave while it was on.

Is it worth seeing?

Yea, but you have to understand what you’re seeing. If you’re looking for either a screamingly funny comedy or an extremely action packed martial arts film look elsewhere, this film isn’t those things. If you want a good looking film with a bunch of ideas and some situations that will make you smile give it a shot.

For all my bitching and moaning I’m going to make an effort to see it again, but somewhere down the road. I still have my ticket for the 11th so I may try it again…or not. I’m not in a huge rush. 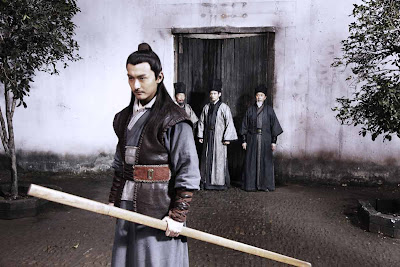