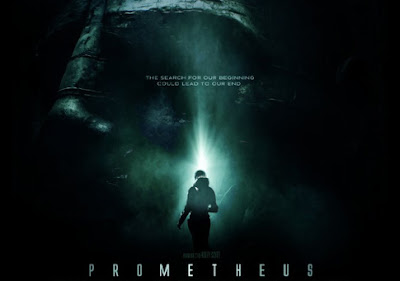 When the end credits rolled i said out loud to no on in particular "Well that was a stupid movie."

I should say that it is enjoyable in a leave your brain in the dish at the door sort of way, but it is in no way a classic.

The plot of the film has an expedition from earth in some 90 years time, heading to a far off planet in order to find the creatures who may have made humans. What they find there is the movie.

A muddled film that seems to have been cobbled together from any number of science fiction films from the last 100 plus years, the film doesn't have an original bone in it's body. It begins with shot for shot references to 2001,  the film then steals shots from Ridley Scott's earlier Alien before stealing bits from other films.

Let me stop here and say that the film fails because the film wants very much to tie itself into the Alien mythos, while at the same time it wants to remain distant from it. Basically it wants to tie itself visually to the earlier film, while insisting that the events depicted are not a prequel. It's basically trying to have it's cake and eat it too. To be honest it's horse shit. The film essentially wrecks or stands outside of the Alien film/book/ comic universe with these weird ideas that make it  look more like the work of a lazy fan boy with no creativity of their own rather than a master director. The fan boy screams I've made something original,  when in fact   they haven't come close.

I'm going to bad mouth Ridley Scott for a moment. The film's connections to Alien terrifies me because as subtle as Scott was in the first film by not explaining anything and as he was in wanting no voice over in Bladerunner, this film becomes sort of  a painful voice over added to Alien. It fills in all the details that were missing in the first film and wrecks it. It's such a misstep that all I can think is that now that he's gotten his cut of Bladerunner accepted, what ever he's planning for the sequel with just wreck what went before.

While I can admire that the film is essentially a quest for god and it's asking of who made us? I can not stand how clumsily it's handled. Its a weird quest with no answers, which I could live with, but how they present them, and the arguments they use- the idea of a mad god, just don't work. There are huge gaps of logic...

...and speaking of gaps in logic., this film is basically events connected by huge gaps of logic. No one does anything logically. Things just happen. Its not a matter of Scott chopping the film down, because having read the original synopsis of the film it never made sense. NEVER EVER.

Let's start with the characters mostly being scientists who stop being scientists once they reach the planet. They rush into the alien structure and start farting around like teenagers. They find dead bodies and evidence of terrible danger but ignore it all. Time and time again things happen for no real reason. Or worse things just seem to happen for the hell of it. What's with the alien projections of past events other than to act as clumsy exposition? Why infect the doctor? What the whole thing with the opening sequence? Baby? Not explained or even at hinted at.

Nothing makes any sense at any point beginning with the time frame of being set 80 years from now (highly unlikely). And it only gets worse as the film goes on to the point that many people in the audience were laughing as things happened. Honestly almost everything that happens makes no sense and only happens to keep the plot going.

It reminded me of odd ball Euro science fiction films from the 60's and 70's or maybe some twisted film from Al Adamson or someone else who worked with John Carradine, but with a bigger budget. (If anyone finds or does a list of all the references to other better films please let me know)

Truth be told the visuals keep you watching even as the story and lack of believable characters sink the film.In all honesty other than one beastie attack early on (which is a great sequence but makes no sense as to why it would happen...they picked that place to rest after not being able to find their way out...really? really?) the only really reaction to the film was to moments that referenced Alien. For example it was applause as the "gun" comes out of the floor. Otherwise the film provoked no real reaction.

There are many amazing visuals, the storm bearing down on the ship, the references to the earlier film, the engineer battling the squid like monster which seemed to have been lifted from a Richard Corben painting, the flight of the "alien ship". The film kept me watching so I could see the next visual treat.

This film could have worked had Scott not decided to drag in all of the BS baggage from his classic from 33 years ago.

...it's also an incredibly stupid one. Its proof that even people who know better shouldn't be allowed to make movies some times.

(A second spoiler filled look will go up Friday)
Posted by Steve Kopian at 6:30 AM