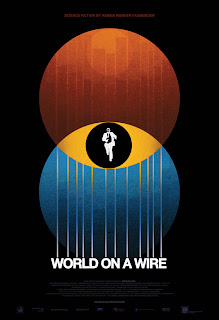 Before the Matrix or anything similar there was Rainer Werner Fassbinder's two part television movie about a new super computer that is being used to run a simulation of the real world that you can go into. Of course as its getting closer to going on line strange things begin happening and people are dying- what is going on?

This is a good if over long (each part is 100 minutes) story dealing with many of the scifi ideas that are now so hip and happening- only this was done almost 40 years ago.

Fassbinder’s low tech, low budget excursion into the realm of reality is probably one of the most quietly influential science fiction films ever. Its been said before and it will be said again that the film has tons of parallels with the Matrix and knowing Wachowskis love of film its more than likely they raided it (and it’s source novel) for ideas. It can also be seen in films like eXistenZ, Brainstorm and any film where you put on a head set to enter a computer world.

The film is a messy head trip. Its questioning of what is real and what isn’t is way more troubling than the Matrix films simply because with World on a Wire you really don’t know where one world ends and one begins. Unfortunately the film gets side tracked with other things that do help expand the horizons of the film but also make it seem much longer than its three hour running time. Don’t get me wrong I like the film a great deal but I really wish it had been scripted tighter. I guess that’s the danger of making a film to fill a two part TV slot.

I’m sorry this piece is so jagged, but in all honesty I have been battling with the piece for the better part of a year. Drafts come and go and I find that I can’t explain the film really well enough beyond saying you need to see this influential film.

Ultimately everything you thought was new and clever about similar films, isn’t, it was all done here first.

Out on Criterion DVD and Bluray
Posted by Steve Kopian at 6:43 AM