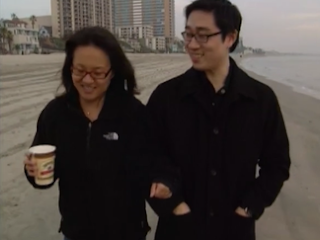 If they are going to destroy things, burn things down, hurt somebody, you aren't going to hurt just that one person, you are going to hurt their whole family....In the Middle East these soldiers are dying. It's not just that one soldier dying, that's not the problem. All the peole in his family- his mother,father,wife,children, all the people around him are also damaged. The pain will never disappear. Most people try to move on but they keep the pain in their hearts. - Alex Ko's father

Part of the KAFFNY look at the LA Riots 20 years later.

The film is the story of filmmaker Alex Ko's family and how the LA Riots altered their lives.

This excellent short film (it runs about 25 minutes) covers a great deal of ground. Ko, in looking at his family and the riots digs deeply into his family history, learning not only why his family came to the United States, but also what it takes to be an immigrant in this country. The film then turns to the fateful day when rioters swarmed through Los angels burning and looting and how the destruction of their business sent shock waves through the family. It also shows how the family, eventually came back together.

The strength of the film is that this is a story that is kind of universal. Sure not all of us are immigrants, but are families were at some point, and the need to strive for something better that we all can relate to. And while most of us were not directly affected by the LA Riots we've all been affected by some form of tragedy or even disaster that completely upset our lives or the lives of people we know.

Ultimately its the story of a family knocked about but still standing. Its the story of how family can pull us back from the brink. Its a story that will give you hope.

Another small gem screening at KAFFNY,
Posted by Steve Kopian at June 07, 2012