This must see documentary on Buster Keaton's time at MGM is like having the story told to you by a good friend. Narrated by James Karen in the style of a friend telling a friend, the Keaton time at MGM, and indeed his whole career comes alive in ways I never expected. 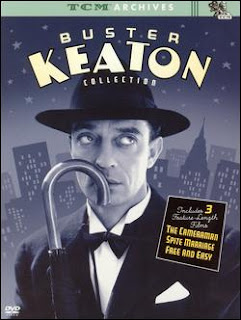 The documentary begins with James Karen outside of the Sony Studio Gate. Long ago this was the MGM studio and it was through this gate that Keaton walked, a bit bewildered that the studio would want him. By the time his initial time there was done, he would regret it.

Keaton and the studio were at odds from the start. Keaton worked one way, with a movie's beginning and ending set at the start and lots of improvisation in the middle. The studio wanted every detail mapped out at the start. While they would listen to Keaton at the start by the end they ignored his suggestions and told him what to do... and from a financial point they were right, Keaton's films were huge hits.

Complicating matters was the fact that Keaton's life imploded.His relationship with his wife and her family turned beyond sour. Keaton to get over the pain at work and at home began to drink heavily. He became "unemployable".

...or so we would be lead to believe since as the documentary shows Keaton eventually turned his life around, and most amazingly went back to MGM as a gag writer for people like the Marx Brothers (many of the visual gags you remember from Night at the Opera are his)

If you love screen comedy, if you love Buster Keaton or if you love movies you must see this film. An amazing revealing look not only at Keaton, but how films were made in the late 20's and early 30's. While much of the film is narrated by Karen, there is also excerpts from an interview with Keaton himself. He talks about his life and how he made his movies. It's amazing and made me run to Amazon to see about a book of interviews with Keaton I had seen.

Another treat of the film are some home movies made by someone when Keaton was shooting his first MGM film The Cameraman in New York City. It's really cool.

This is a great great movie.

See the film, either on Turner Classic or on DVD as part of the TCM Archive collection which has The Cameraman, Spite Marriage and Free and Easy.
Posted by Steve Kopian at June 13, 2012