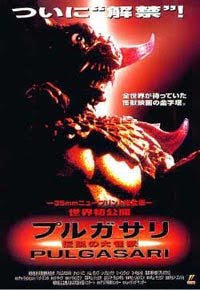 I am not a "fan" of this film. It amuses the hell out of me on a so bad its good level, but I don't like it as more than a curio. I have friends who think I'm being to harsh on the film, which considering that they know my tastes in movies is saying a great deal. My reservations aside I do think the film is absolutely worth seeing on any number of levels other than a straight forward movie. What follows is a piece I wrote years ago for another of my blogs on the film. If you've never seen any North Korean films , odds are this is going to be your only shot. And to that end I present Pulgasri, a movie more interesting in what it is supposed to be and how it's made rather than in its story.

I'm sure years of therapy will erase the scars left by thie movie, but I don't have that much time.

Okay lets start with a plot run down and I'll bleed from there...

A blacksmith who won't make weapons to qwell a rebellion is pitched into jail and starved to death. As a legacy to his children he leaves a small metal doll which comes alive when one of the blacksmiths daughters gets a drop of blood on it.

The monster eats metal and begins to grow.

Its a weird twist on the Daimajin films from Japan.

The monster is one of the stiffest rubber suits I've ever seen outside of a bondage film and is screamingly funny to look at.You can see how the head piece sits on the body. The actor playing the monster at times looks like a boxer warming up for a fight weaving and rocking in a jerky style that brought giggles to this viewer.(Those of you into bondage may want to see about getting one for yourself since it severely limits movement and is probably torturous to wear)

The "bluescreen" work is laughable, simply because the film stocks don't match.

The destruction scenes are surprisingly good and well done, in many ways better than most Godzilla films. The collapse of the buildings seems to be very realistic.

The battle scenes while epic in scale are laughable simply because many of the weapons,say the bolders are, obviously cardboard or plaster. There are thousands of people on screen for some scenes and it looks good but they are often simply running to and fro.

My question is who did they think this film is for? It looks like a TV series blown up to feature size. The level of the story seems to be that of a second or third grade mentality, especially in its humor but it has real animals being carved up, torture, nasty battlefield death and ideas that no child would grasp or care about. Its a childrens film made for adults.

This is one of those its so bad its...something movies. Its a mind warp and complete mess. I like bits of it and other bits leave me with slack jawed disbelief. Frankly I was thinking that if it was suppose to be a tongue in cheek sort of thing then I could consider it a good joke film, but since the film is serious and meant to "mean" something then its a disater.

AND LEST YOU ASK IF I'M CERTAIN ITS SERIOUS----
The South Korean director was kidnapped by the North Koreans to make movies like this for them. Luckily he eventually escaped.

Do I think you should see this movie?

First how much do you love giant monsters?

Second how drunk can you get and still see the screen clearly?

Either way DON NOT WATCH THIS ALONE, you'll need someone to help you pick up your jaw off the floor.

For those wishing to further read on this film, and it is interesting, no kidding, here are some links (The first one especially):

If nothing else reading the different reactions is very interesting....
And if you want more links look them up yourself...
Posted by Steve Kopian at June 22, 2012