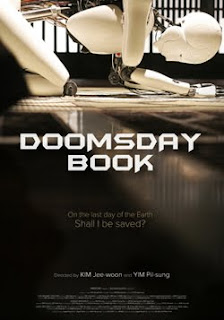 Three story film about possible ends of the world is a mixed bag. The first and last segments, directed by Yim Pil-Sung are nowhere near the classic middle segment by Kim Ji-Woon.

The first segment is called BRAVE NEW WORLD. It's the story of a young man, left home by his parents and sister when they go on vacation. He has his military service to finish up and can't go. Unlucky in one respect, he has found the girl of his dreams. Sadly due to tainted meat, people are turning into zombies. It's an amusing trifle of a film that produces several belly laughs, mostly having to do with satiric jabs aimed at television. I liked it but it isn't anything special.

The second segment, HEAVENLY CREATURE, is a masterpiece. It is a deeply moving philosophical look at a robot in a monastery that appears to have not only become sentient, but enlightened to the point of being Buddha. Yes, it's a story that has been done before, but I don't think as well as this. Not only does the film tackle the notion of what it means to be alive, but it also beautifully ponders religion and enlightenment. If you are looking for a film that touches the head heart and spirit, this is it. This piece is one of my favorite films of the year. Actually I would argue that the film is as close to perfect as possible, with the exception of a final piece that isn't necessary. If you see Doomsday Book, see it for this piece, it's one of the best science fiction stories I've run across in a very very long time.

The final segment is called HAPPY BIRTHDAY. It's another dip to the comedic well, this time concerning a giant 8 Ball heading toward earth. The whys and wherefores are best left to the film (though I will say be careful what you order on line). This is another satiric end of the world tale with several big belly laughs, again coming at it's sending up of modern TV news and home shopping networks. In all honesty it's a good piece,as is the first one, it just doesn't add up to very much, despite some amusing bits.

The instant reaction to the film was why couldn't the two comedic pieces be like the middle section, which is an unfair thing to say. They are simply different styles of story...which is the problem. The styles and the tones of the films simply clash, making the over all film good instead of great. I suspect that had the bookends had a middle segment keeping in the comedic tone it all would have played better.

I should stress that nothing in the film is really bad and that the film, over all is still quite good.

Definitely high on my must see recommendation list for this years New York Asian Film Festival, you must see this film for HEAVENLY CREATURE because as I said it's one of the best films of the year.
Posted by Steve Kopian at June 25, 2012