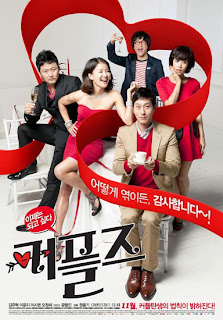 The plot of the film is way too complicated to simply relate. It begins with a couple meeting on a bus, shifts gears to a couple in a café getting together- or rather agreeing to get together if he can come up with enough money to buy a house. He does, and it all goes wrong from there including a near car accident that goes wrong, a bank robbery, and assorted other crimes. As the story spins out we see how every seeming unrelated bit ties in to every other bit.

At first I kind of groaned at some of the humor which had terrible things happening to a seemingly nice guy, then it got bigger and sillier and I could agree with his assessment that this was the worst day ever even as I was laughing at his plight. From there I watched as various couples came together and fell a part in a romantic comedy of errors.

This film blindsided me. It was the 19th film I saw in prepping for the NYAFF and while I had been enjoying the films, other than the older films only one or two films really impressed me and sent me over the moon. I was beginning to think this was going to be a festival of just good films with very few great ones (which is the opposite of the way it usually goes). I put this on with the half hearted intention of being disappointed. I was shocked at how much I was smiling and laughing. Sure it’s more a confection than a meal, but it’s a wonderfully sweet one that puts a big broad smile on your face. I can’t see anything wrong with that.

Actually the film is so good that I can’t wait to see it again.

I can’t say anything better than that except go see it.