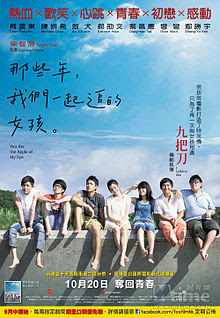 Based on the writer directors autobiographical novel this is a well made and flashy coming of age story about a bunch of friends in high school and how a pair of them kind of fall in love.

I suspect that you’re either going to love or hate this film. I’m mixed on it. It’s got great performances, looks great but is so knowing and striving to be so hip and happening that it tried my patience. My patience went out the window early with the third shot of Boner’s boner in two minutes. It wasn’t that funny the first time, and by the third one I was just like "oh please". I could deal with some of the knowing jokes and smart attitude (the film is told in flashback so the attitude is how we hear the story), but I really didn’t care for the film’s insistence on playing to the gallery since the characters are good enough that we don’t need to be pandered to. (And yes I know that's how people of a certain age are but the film seems to want to be better than that)

For me the film's weakness is the bookends. The film opens and closes in 2005 as the characters are off to a wedding. The film then flashes back to 1994 where our hero meets the apple of his eye, an honor student and they fall in love. When we see them now they seem to be the same exact people we had seen at the start of the film despite the passage of time and some maturing along the way. Visually there doesn't seem to have been an attempt at aging them, nor do they seem to have grown up despite indications in the central part of the story. They are still the same kids at 27 that they were at 16. It felt wrong. Also feeling wrong was the final fade out which begs the question, you waited until the most inopportune moment to get it together?

I’m sorry to pick on the film but I’m annoyed with it since it almost worked. It almost was great. Its like they had all these great things and then just put them together in such away that the portrait has an eye in the center of it’s forehead. I wanted so much to like the film, nay, I like the film, I wanted to love the film but instead I find I want to smack it up side it’s head and say will you pull yourself together.

Worth a shot, despite my misgivings, especially since my reluctant attitude is in the minority.

(I also reserve the right to change my mind upon a second or third viewing)
Posted by Steve Kopian at June 28, 2012