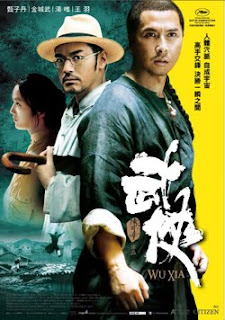 This is a review of the full version of the film which is not being run at NYAFF. The festival is showing the shorter version because it is the only one available for screening in North America. It is 12 minutesshorter than the the full film. I mention this because I make reference to the length of the film and it's pacing which are different in the reduced version.

I have no idea why the film is called Wu Xia or retitled as Dragon. Yes it has something to do with martial arts masters but at the same time there is only 3 fights in the whole film. That's just one of the many things that don't make a hell of a lot of sense in the film, which was the first sell out of this years NYAFF.

As the film opens Donnie Yen is living quietly with his family is a small village in China. Everyone is beginning to prosper thanks to a new paper mill. When a couple of toughs try to break rob the local tavern Yen manages to stop their attack by killing them. Unfortunately for Yen this brings in investigator  Takeshi Kaneshiro,who  begins to see more to the self defense killing than anyone  else. The result is to kick up a hornets nest and expose some things better left buried.

As you will see I am extremely all over the place concerning this film.  The feeling is the result of the film being essentially three or four separate films grafted together into one Frankenstein monster of a film.

The film opens with one of the greatest openings of the past year. Simply put, the first 12 or 15 minutes of the film, until the appearance of  Takeshi Kaneshiro, is a magical piece of film making. It's the sort of thing that we go to movies to see.  The sequence, life in the village, Yen with his family, and the first fight is incredible. I was hooked and I thought I would be willing to follow the film anywhere.

At this point the film shifts gears as Kaneshiro begins to investigate. Much of the second 20 minutes is a very long sequence as he plays over the possibilities of what actually happened in the fight. The film then goes over to Yen and Kaneshiro playing games as the detective tries to figure out who Yen really is. This part of the film, running about 40 or 45 minutes is a slow methodical slog. It's not even so much Kaneshiro finding evidence but pondering things and asking questions.

At about the 70 minute mark the film shifts gears yet again, into a completely different direction as Yen's past comes crashing into the village. This allows for the second fight of the film, a killer diller that stretches from the village square across roof tops into a barn and then... but that would be telling. The fight is amazing. Its a kick ass piece of action cinema that has a few twists and turns I haven't seen before. I loved it .

If you're sensing a "but" you would be right one is coming.

As much as I loved the fight, it also signals the films shift into the realm of WTF is going on. Yes, the ground work of most of what happens had been laid earlier, but at the same time the rapid series of revelations, and truly odd plot twists make the final 35 minutes seem like it was grafted on from one of the wilder martial arts films from the late 70's or early 80's.  All logic and reason goes out the window in order to end the film before two hours has run.

I wasn't sure what I was seeing. Sure much of the film seems to be a Les Miserables re-think, but then there are these weird turns that make no real sense.

Is it a good film?

Yea, it is. But it's not a great one. It has some great stuff in it, Donnie Yen's performance, the first 15 minutes, the action sequences, but the story is a mess both in it's construction and it's pacing. In some ways I'm really glad I didn't score a ticket for the screening at NYAFF since I probably would have been tempted to walk out after the mad dash I would have had to have done to get there from work. I rushed in for this?

Don't get me wrong I like the movie. I just am glad I'm not moving hell and high water to go see it.

To be honest, the first reviews I read of the film way back when it first was released were dead on target. The reviews said the performances and the action were great, but that the story wasn't worth it. I have to agree.

If you have a ticket for this at NYAFF do go, you'll have a blast during the few fights. If you don't seeing it on DVD will be fine.
Posted by Steve Kopian at June 30, 2012