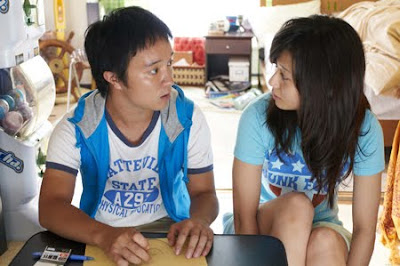 From Yoshihiro Nakamura comes a film based on the work of Kotaro Isaka, who supplied the source material for three other Nakamura films including A Fish Story.

Poetechi is the story of a young man, aburglar by trade, who ends up in orbit around a baseball player born on the same day as himself ... and thats about all I can say about the plot since if you've ever seen the majority of Nakamura's films you know that the plot lines dive and loop back on each other with a fierocity that is both  unnatural and completely believable. If I tell you anything up front it will reveal something later on. Trust me when I tell you it's very much a kin to A Fish Story and Golden Slumber.

In fairness I also have to mention that the other reason I can't say too much is that this is a triffle of a film, running only 68 minutes so there isn't a great deal to the plot..(There will be a shorts program screening with this on July 15th). The fact that the film is so short (at least relative to todays typical 90 minute or morning running time) is  that the film wonderfully does what it has to do and gets off. Its a film that doesn't do more than it has to.

I like this film a great deal. I like it's short and sweet approach to filmmaking. The film is full of great chracters, from our hero, to his girl, his mom and his friend, a man who can't empathize. Its a wonderful bunch of characters who you'd love to hang around with. They are the sort of people you really root for and become so invested in that by the time the film ends you find that you've been moved emotionally even though there really doesn't seem to be a reason for it. (I'm still trying to figure out where the hell that tear came from- chalk it up to a brilliant filmmaker.)

In fairness I do have to say that as Nakamura films go, this isn't my favorite, that has to go, by a mile or six to A Boy and His Samurai from last years NYAFF. I also find A Fish Story better. But this is solidly among the rest of the surprisingly excellent pack (has he actually made a bad film?). I should also state that just as it's unfair to compare a short story to a novel, it's not fair to compare this shorter work with his other films which are much more complex.

Definitely worth hauling ass over to the Japan Society to see, especially if you can piggy back it with one of the other films that are playing that day (Ace Attorney, Tormented or Monster's Club)

This is screening as part of the Japan Cuts look at Post 311 Cinema.
Posted by Steve Kopian at June 27, 2012