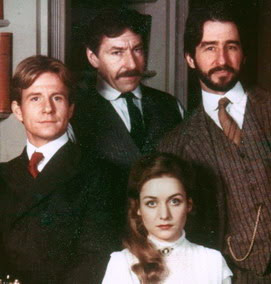 This week we're doing a bunch of busted TV shows. Ones that ran a season or so but went nowhere.

Before Law and Order Sam Waterston starred ina brief series for CBS in 1982 called QED. The tetitle is the initials of the lead character Quentin E Deveril. Deveril was a mad inventor super genius working in in ENgland in the days just prior to the First World War. Along with some some friends he strove to make great inventions while battling his nemesis Kilkiss.

Its and amusing show and it was one of the first things that I ever recorded on video tape when I got a VCR for a high school graduation present. The VCR arrived just in time for me to record the final episode of the series. It was the only proof I had that the series existed since no one I knew ever saw it or heard of it.

Then a weird thing happened. Several years, maybe even a decade later Showtime picked up the series and reran the episodes. thrilled to death I recorded the entire series, all six episodes.

The best episode of the series is indeed the first one. this is clearly the pilot with Deverill fighting Kilkiss for control of some military weapon. It sets up his friendship with Charlie, a reporter and it introduces Jenny who Charlie fancies, but who seems more interested in the professor. I say that the first episode was the pilot because after that there are differences in the characters, Deverill is softened and there is changes in the relationship of the three leads. The problem is also that the writing isn't as crisp and strong, the plots are stand issue TV plots but moved to Edwardian England.

Reservations aside this series is a blast. Its a great deal of fun that is so refreshingly different from everything else you see on TV. Its almost a kind of BBC style series except that it ran on CBS.

Currently unavailable anywhere that I know of you'll have to hunt around for a collector who has the series for sale.
Posted by Steve Kopian at June 04, 2012