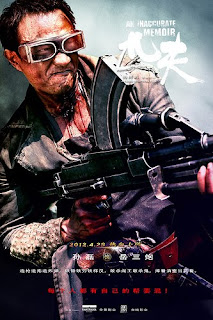 I was hoping this film was going to play at the NYAFF this year but it didn't happen. I saw this film a couple weeks back in Chinese with no English subtitles, wrote it up and considered publishing it in the hope that maybe the NYAFF would see it and get it, but then Mondocurry talked me out of it. I then slotted it as the first film of the NYAFF reviews just in case, sadly it didn't get scheduled.

Heart broken I had to figure out where to put it. I couldn't come up with a place, and then I decided to just post it because I want you all to know about this film. Sure it's going to get lost in the flood of NYAFF titles, but in actuality I'll have put the name into your brain so when you see it again you'll know you should see it.


The plot of this film has to do with a band of rebels/gangsters fighting the Japanese during the occupation. A plot is hatched to kidnap a relative of the Emperor of Japan but there is a traitor among them…and there is a giant statue that is frequently present in various forms through out the film.

At times a hip happening film, Memoir upends our expectations by telling the story as the movies would and yet always allowing hints of real world nastiness to creep in. The final black and white tale of everyone sailing off is contrasted by actually know what happened. Heroes are, in their way, made in the telling and the telling is always inaccurate.

And telling is also slightly disjointed as the film moves around in time slightly reordering events.

I really like this film a great deal. Yea granted I don’t speak Chinese, but having read a bit of the plot I was able to follow what was going on more or less. It helps that the cast is a bunch of characters, each person, man or woman, has a distinctive look that make it easy to know what they are all about. Also the performances by the actors are such that you get a sense of what they are doing.

The set pieces are amazing. The opening sequence is a fancy banquet for a Japanese official where everyone ends up with guns drawn is a mere teaser (and it’s picked up later in the film). After that we get an assassination sequence that clues us into the cast, while also showing us the coolness of the characters as they go through there paces as the Japanese haul that damned statue through a town. Later sequences include a dandy shoot out with paper mache masks, some ugly torture and of course the final battle sequence complete with sword wielding school girl. The action is worth the price of admission alone.

Shot in style that reminds me of the films from several decades ago (the titles remind me of films from the 1970’s) the film also adds in modern day cool. Watch how the assassination sequence is done with the introduction of each character leading into the next bit as characters get into place and a gun ends up being nonchalantly tossed into an out stretched hand.

I should point out that the film is essentially a western but set so far west as to be in the East. Filled with dusty towns, horses, good guys and bad guys, the film is for all intents and purposes a classic American western made and set in China. It’s part of a trend of films coming out of Asia that I’m rather enjoying with films like The Good The Bad and the Weird, Let the Bullets Fly and Wind Struck pumping new life in to genre that has become painfully moribund.

Need I say that I really liked this film?

Need I say that I’m looking forward to seeing this in English? 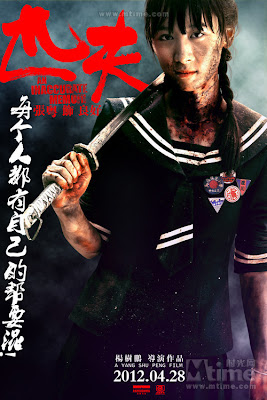