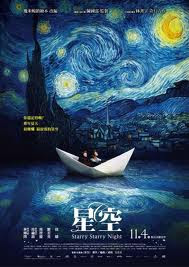 When I sat down to watch Starry Starry Night I found very quickly that I wasn’t in the right mood to completely give myself over to its sense of whimsy and magical realism. I state this so you can better judge my reaction to it.

This is the story of Mei. She is a teenager living with her parents some where in Taiwan. Her parents are verging on divorce and Mei frequently looks to her grandfather, who lives in the mountains, for comfort. Mei also has flights of fancy seeing toys come to life or the world as versions of her favorite paintings. One day she makes the acquaintance of Zhou, a new boy with a decidedly awkward way in the world (this is the result of his mother keeping them on the move). Zhou also has an artistic bend. The pair grow close however the world would see them kept apart.

Coming of age story based on an illustrated novel is either going to tickle you pink or send you screaming from the theater. Full of whimsy and magical moments this is the sort of film that can be painfully sweet. To be certain the film is full of truly magical moments and visual treats aplenty, but it’s also a story that is incredibly by the numbers. Don’t get me wrong I do like the film but it also hit every cliché for a story like this. If the film didn’t have a great visual sense and some great performances, this film wouldn’t stand out.

On the other hand, the films visual delights, toys come to life, a parade of origami animals, the world as a Van Gogh painting are worth the price of admission on their own, especially on the big screen.

If the idea of the film tickles your fancy, go.
Posted by Steve Kopian at June 28, 2012