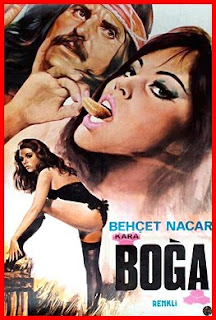 First off I want to say I saw this in Turkish with no English dub or subtitles. I may therefore be completely wrong about some of the plot.

The (SPOILER FILLED) story, I think, goes something like this: a young man angry about something goes to kill a blacksmith whom he thinks wronged him. The blacksmith stays his hand and then tells him the story of his family. Long ago his father left his mother and went off to fight Vlad Tepes (aka The Impaler aka Dracula). Dad was successful and Vlad was killed. A crazed hunchback, who over acts mercilessly, drags Vlad away and raises the dead lord as a vampire. Vlad then returns to his evil ways. Our hero's dad is captured and he is thrown in a dungeon. Our hero then goes off to rescue dad and kill the villain, rescuing and then bedding several women who then die in the process. After several battles Vlad is defeated. The end.

Even if I spoke Turkish this film would still be a (somewhat enjoyable) mess. First the problem is that some of the acting, the hunchback in particular, is beyond bad. Actors play several roles and often wear the same exact clothes for every character (and the clothes are decidedly 1970's polyester in style). Events don't seem to follow logically. And the one guy who looks like Vlad, isn't the one playing him. Granted the film has a budget, so the film has a nice look and decent effects, but they should have thrown some of the cash to getting a decent script.

Its enjoyable if you're used to some of Turkish cinema's oddness, but if you've never seen a real Turkish film, this isn't the place to start.
Posted by Steve Kopian at 5:08 AM