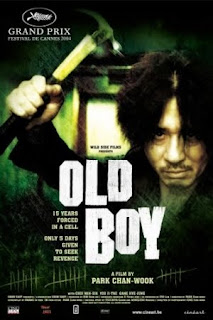 There was a point somewhere in the first hour of Old Boy that my brain exploded. I don’t know where it was, but somewhere along the way I picked up the phone and I called my friend Lou.

“Are you going to be home in about two hours?”

“I have this movie, and you need to see it”

“It’s about to mess up your head very badly”

I hung up the phone and then I dropped the film off at his house when the film finished.

About three hours later he called me up and asked “What the hell was that?”

“Yea, that was my reaction”

“How the hell am I supposed to get through the rest of the week?”

“You need the movie right back?”

“No. I’m still trying to work that out”

He hung up the phone and did.

I should point out that when I saw the film it was as an import. Any sort of US release was ages off, and any talk of the film was coming out of film festivals in Europe and Asia. No one I knew personally knew anything about the film until I started to pass my copy around and destroy minds left and right. No one was prepared for it.

By the time it hit the US shores in an official release the film had a killer reputation, and despite it, still was messing up minds.

Based on a comic book, Old Boy is the story of a man who is kidnapped and locked away in a room for over a decade by someone unknown. He is eventually released and tries to find out what happened to him and why. I won’t say more than that because what happens is the story and the less you know the bigger the effect.

While the film is frequently violent (there is a nasty fight with a claw hammer in a sequence that is one of the best fights ever put on film) and contains of eye popping moments (yes that dinner sequence is real) but it’s the story itself with its revelations and twists and turns that will mess you up forever.

Trust me once you’ve seen Old Boy you will never forget it no matter how hard you try.

If you’ve never seen Old Boy you should.

If you never seen it on a big screen and live in New York you need to go see this at the NYAFF where the film can really work you over…and you’ll really understand what I mean about the hammer sequence.
Posted by Steve Kopian at June 27, 2012