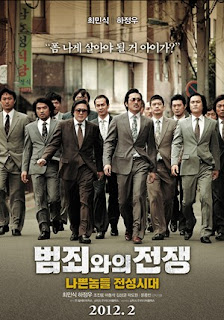 If you're used to Choi Min-Sik playing baddest of the bad asses in films like I Saw the Devil or Old Boy, or if not playing that way, carrying himself that way,you'll be really shocked by his turn in Nameless Gangster, where he's still a bad guy, but he's also kind of a shlub as well.

Choi plays Choi a powerful gangster who was captured in 1990 after the Korean president went to war with organized crime. Choi's picked up after the kidnapping of a hotel owner goes wrong. Sitting in a cell he's beaten by a prosecutor who gets him to tell his story.It starts with him being a mildly corrupt middle aged customs agent who happens upon a shipment of heroin. He takes it to a local gangster and ends up becoming one as well.

Kind of sort of your typical gangster tale is turned on it's head by Choi Min-sik who is at times a buffoon and at others a scary guy (though the one's around him are more scary). You frequently don't know whether to laugh or cringe as small moments turn violent to the point that some one is getting the crap beaten out them every five to ten minutes. Choi keeps us off balance since we're never sure what to make of him, nor are we sure how he's managed to stay alive so long being the way he is. It's a masterful performance by a great actor. Over the last couple of weeks I've gone back over his films getting ready for the screenings at the New York Asian Film Festival and in many ways I'm stunned by what I'm seeing. Here's a man who's tossed off the persona we associate with him and instead become a character who is on screen almost the entire film and who never seems to be some one we've seen on screen.

To be honest the film is so not what I was expecting I feel like I'm going to have to sit down and watch it again just so I can give it a really fair shake. I'm not saying this because the film is bad, it's not rather it's because it takes what I expected, a gangster story, and then shades and colors it in ways I didn't think I'd see. It doesn't help that the end of the film further flops things even more.

Is it a great film? No clue. It most definitely a really good one and one you should be going to see at the New York Asian Film Festival, especially if you like Choi Min-sik. I suspect this is a film that everyone is going to be talking about. I know that it's one I'm going to revisit down the road when I can see the film for what it is.