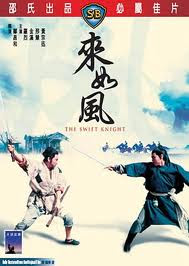 Ah, this is real wu xia.

Old school martial arts film from Chang-hwa Jeong and the Shaw Brothers, and who reteamed the next year for the landmark Five Fingers of Death (King Boxer)

The plot of the film has the title character, a robber who behaves kind of like Zorro or Robin Hood wandering the country side stealing from the rich and helping the oppressed. Meanwhile some bad guys wander in the town and kill two Imperial Envoys, taking their credentials and blaming The Swift Knight. It transpires that they are looking for a certain young woman and her brother...and so is a mysterious beggar. However things are slightly complicated since The Swift Knight is trying to buy the young woman for his own ends... Who are the young people and why do people want them dead?

You kind of have to forget the plot and just go with things since it really comes and goes as required. Yes, there is enough to get you from start to finish but at the same time they've knotted things up so much that the film requires a couple of longish expositional flashback sequences to explain everything.

On the other hand the plot isn't really the point. The point is watching the spectacle in beautiful Shawscope widescreen that as the various characters clashing with each other, and large numbers of enemies as they try and get the girl and stop the bad guys. The point is watching the flying swordsmen have at each other in some wonder ballets of choreographed violence.

Said to be director Chang-hwa Jeong's favorite film, it's easy to see why, it' a nice mix of action and humor. The tone is never heavy and has it some nice shadings of tone (for example the nominal hero, the title character, isn't completely a nice guy).

I really like the film and I'm upset that I won't get to see it on the big screen on July 1 when it screens with the director in attendance (I have a conflict). I suggest that you get yourself down to the Walter Reade and see some old school wu xia on the big screen- just be sure to have a big bag of popcorn and a beverage of choice.
Posted by Steve Kopian at June 25, 2012