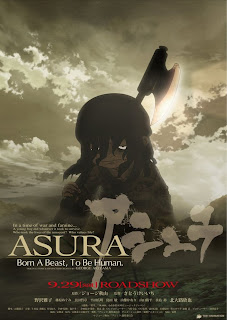 One of the co-presentations between Japan Cuts and NYAFF this year, Asura is an animated film based on a controversial manga. Its controversial because the work is bleak dark and depressing, things that the animated film is in spades. As they said before the press screening it's anti-Miyazaki. I also suspect that if it played at Disney World, the characters would all commit suicide and Walt would spin in his grave.

On the other hand the film is a beautiful piece of animation that mixes styles to perfectly replicate a manga panel in both 2D and 3D. Its a masterpiece of animated art that forces you to feel something even though it's not shiny happy rather its the sort of thing that makes you want to crawl in a hole and die...not the sort of thing most people look for in an animated film.

The story concerns a small boy, born into 15th century Japan which has been ravaged by famine and drought. Everyone is hungry. Everyone abuses everyone else. Asura grows up, more animal than human, devouring anything and anyone (yea he's a cannibal) that gets in his way. Meeting a monk on a bridge his life is changed...as is the lives of everyone he meets.

This is a magical melding of art and music. The film frequently goes for a feeling rather than absolute narrative perfection, and it works. The creation of the feeling of the pain of existence that is so strong that I wondered if I was going to be able to handle a second film (Isaw this as part of adouble feature).

The film also is an amazing philosophical discussion of the darker side of life and man's desire to over come it.