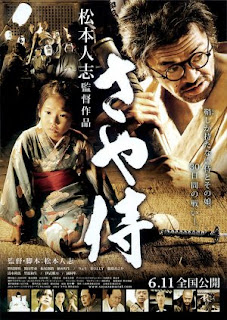 From Hitoshi Matsumoto the director of Big Man Japan and Symbol comes the story of a disgraced samurai given 30 days and 30 attempts to make the son of a lord smile or else commit suicide.

Traveling across the country, with his daughter following in close quarter the title character is hunted by various bounty hunters. He barely says a word while his daughter admonish him to behave like a real samurai and just kill himself. Captured and brought before a local lord he is given the sentence of the 30 Day Fete, trying to make his son laugh with in 30 days. Helped, or perhaps hindered, by his jailers the sad sack fellow tries to come up with a means creating laughter.

As with the director other films this is a very deliberate movie. The humor is very dry and calculating with lots of silly faces. The film heads in directions that don't really seem to make sense, or rather only make sense once you get to the end. Simply put what the film is really about isn't readily apparent until it gets to the point where it lets us in on what it's really about.

The question about what the film is about and what is really going on I'll leave for you to discover. I don't really want to spoil it but I will say that the film is incredibly bitter sweet and by the time it ended I found my ass had been kicked to the curb. This wasn't what I was expecting.

The best thing I can say about this film, which is one of the best films I've run across at the New York Asian Film Festival is that it's the sort of film that instantly demands you see it again. By the time it reveals all of its secrets you need to go back through the film simply so you can understand what you've just seen.

Put this on your must see list at NYAFF/ Japan Cuts 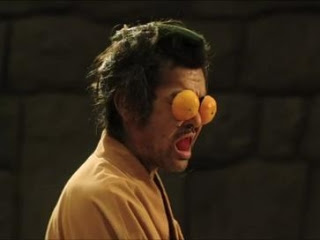