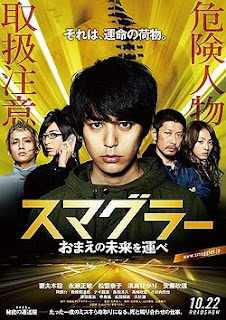 Smuggler is a manga based confection from the mind of Katsuhito Ishii who gave us A Taste of Tea, Funky Forest and Sharkskin Man and Peach Hip Girl. An odd mix of tone and styles it's a film that is going to be loved by some and I think hated by others.

The plot of the film follows Kinuta, a struggling actor in way over his head to the yakuza. He really has no way of paying them back and is kind of relieved when he finds out that his debt has been sold to a company who is going to have him work it off. Then he finds out he'll be working moving bodies and cleaning up messes for the bad guys. It's a job that runs him smack dab into the middle of a war between Japanese and Chinese gangsters and eventually has him acting as a stand in for a vicious hit man named Vertebrae.

I'm not sure what I make of this film...no strike that...I'm not sure I like this film or if I hate it. A great looking film with a great cast of actors the film is plagued by a tone that is best described as all over the place. There is some really serious stuff going on here and yet its under cut by sense of silliness that chaffed the hell out of me.

The has pieces that seem rooted in the manga, one character has big eye brows and wildly over reacts, a female mob boss dresses like she's going to tea,  while the violent action sequences freeze frame and go in an over the top manga style. This over the top silliness crashes head long into the reality of some characters, Kinuta and his boss, and of the nastiness of the violence (bones break and bodies contort with blows).

Am I supposed to laugh or groan?

By the time the end came, I not didn't know what to feel or think about any of it. It didn't help that the costumes undercut the incredibly ugly and prolonged torture sequence. And as for Kinuta's transformation,I'm not sure it added up to much. It's not a matter of getting it or not getting it, I've seen enough way out films like this to know just go with it. It's not even a matter of having seen this late at night,  it's simply  a matter of not feeling it any of it works together.

You know what I kept thinking while watching this? If Takashi Miike had directed this it would have worked. I suspect it would have. All I could think of was Ichi The Killer and how that film trod a very loosely related ground and made it work. Through much if Ichi I didn't know what to think or feel  but I at least felt the director knew what he was going for, here it just seems like he didn't.

And I should explain that when I say this film doesn't work I mean just that, it doesn't work. It doesn't come together as a whole film. I don't think the film is bad, not in how we think of something as bad or good. rather I mean it doesn't work, as in if it were an engine it wouldn't start.

After thinking about the film as I write this I have to say that I really don't like it.

If you can connect with it's wacky tone and enjoy the realistic violence in cartoon action sequences you'll love the film, if not you'll walk out like me and wonder what the hell that was all about. 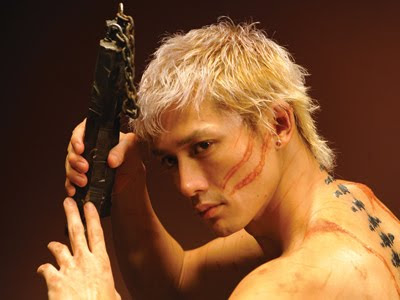