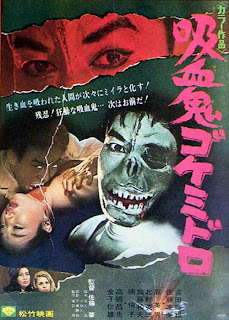 Off the deep end- in a good way- film concerns the passengers on plane, which is hijacked, crashes on a desert island, and ends up battling alien invaders who are re-animating the dead as part of an invasion plan.

It’s wild and wonton craziness from Japan that some how manages to stick with you. It helps that the film is not played for laughs, and is instead deadly serious. There is something about the intensity that helps put over the seeming silliness of the plot. It also helps make you forget that variations of the plot had been used off an on for years (Invisible Invaders, Puppet Masters, Bain from Planet Arous).

Actually what helps a great deal is the striking visual sense. The marvelous use of color and shot composition to add to the impending sense of doom that pervades the entire film. Think I’m crazy? Consider that Quentin Tarantino stole bits for Kill Bill and other films.

This is a really fun film and would be a blast if it was ever paired with Matango a trippy science fiction film from the same period about people turning into mushrooms. (no really, its not as stupid as it sounds).

The fact that this is being shown late at night at the NYAFF is a real treat. The mere fact we are getting a chance to see this projected big is a rare treasure, and that the film is being properly screened late at nigh makes it even more special since this is one of those perfect films which works best when seen on the edge of sleep.

An absolute must see at the NYAFF.
Posted by Steve Kopian at June 29, 2012