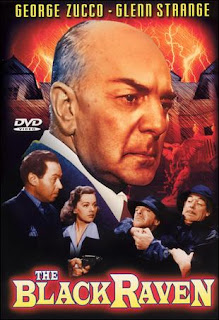 This is truly a movie for a dark and stormy night.

Somewhere near the Canadian border in upstate New York a group of no quite honest people all arrive at the Black Raven Inn looking for a place to wait out the rain which has washed out the bridges to Canada.

The plot starts with the arrival of all these various people to the inn. When one of them is discovered to have $50,000 greed takes hold and murder insues. Who did what and why is the order of the day and things get complicated by the arrival of the police, or in this case the sheriff, played in very different style to Ming the Merciless by Charles Middleton.

The cast includes George Zucco, Glenn Strange, Charles Middleton and I Stanford Jolley all of which you've seen in countless films and serials of the 1930's and 1940's. Its a movie buffs wet dream.

To be honest this is 3/4 of a great film. The trouble is, and as someone on IMDB comments theres a point at which the film decends into people running around the inn. Its not a bad thing simce the cast makes it interesting, but its a dull routine thing especially up to that point it was an offbeat take on steroetypical idea. The film recovers in the final moments as the killer is revealed.

I do like this film alot and wish it hadn't run out of steam in the final quarter. Its on thing to run out of steam, its another to do so in a movie thats only an hour long. Despite that this is going to be a movie I'll watch now and again on those dark and stormy nights...

If you like the mysteries of this type by all means find it and buy it.