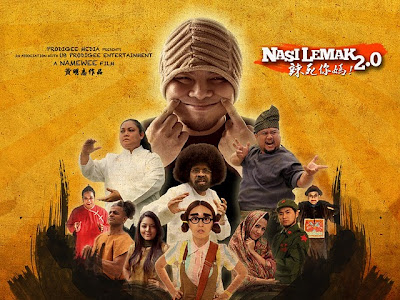 The film concerns a Chinese restaurant where there is a power struggle between the people running it. When it's decided that the way to decide who gets control of the place will be done through a cooking contest. This leads into writer director Namewee being drafted to help one faction. Of course the chef on the other side is the man who was his better in Chinese cooking school. In order to learn to be a better chef, and to accept localization of his recipes, he goes on a quest to learn how to make nasi lemak, which is a Malay rice dish (I say that because I had no idea what it was until I saw this film).

Very silly, frequently funny, always charming film mixes so many different styles and genres that odds are if you can go with it you'll have a good time. It's like a crazed Stephen Chow film but without the nasty/mean edge that Chow frequently has. I'm kind of at a loss to really explain what this film is simply because so much is going on. One minute its a martial arts film, the next a musical, the next something else. Basically it's the story of a couple of likable characters on a martial arts kind of quest, but with food preparation instead of fight techniques as the goal.

Its a great deal of fun.

The film was made without Malaysian government aid or endorsement and was greeted with protests in some quarters. Why? Beats the snot out of me.

If you want to have a laugh or two, and a good many smiles, go see this when it plays at the NYAFF. Hell you might even get the urge to sing along with the films karaoke musical numbers.
Posted by Steve Kopian at June 23, 2012