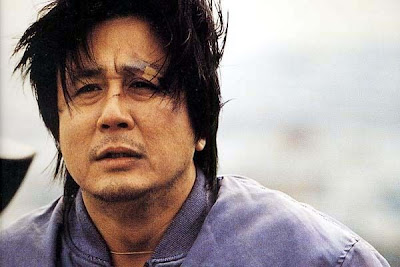 Kang Jae, a gangster just out of prison heads back to his gang...which is in bad shape thanks to young turks nibbling away at it and police investigations concerning the boss's smuggling of Chinese immigrants. Kang Jae's lazy behavior pisses off the boss, but he's mindlessly loyal.

Failan is a young girl left with no one after her parents die and she is unable to find her remaining relatives. In desperation she takes an arranged marriage to Kang Jae.

The film is not really a typical gangster film. If you go in expecting that you are going to be soundly disappointed. The film is very much a sad look at two very lost souls who manage to connect and then, through circumstance disconnect only to realize… well that’s the story.

If you instantly think of Min-sik Choi in his madman roles you need to see this. I completely understand why Choi loves this role. While most people think of him as some sort of psycho ala I Saw the Devil, this is a role that allows him to show nuance and shading. The whole role is made up of the shades of gray which he's sadly not often allowed to show. While he is often his typical bull in a china closet, say in the opening in the video game parlor, we also get moments of smallness and deep emotion, a late in the game scene where he sits and watches his wife on video is extremely touching. It's a role that gives him a range of emotion that is missing from many of his other more flashy roles (Old Boy excepted)

Actually if you want to see a wonderful under appreciated and little seen film, see this one.

I apologize profusely for not going into greater detail, but I’m afraid by saying too much I’ll spoil it. I had the film for a very long time on DVD before I pulled it out to review it for the festival. When I saw it I watched it more or less blindly, knowing only the most basic plot and I think I enjoyed it more since I was free of any sort of expectations. Trust me, this is a small gem of a film that not enough people have seen.

If you can, go see this at the NYAFF. See it there so you can ask him why he doesn’t do more films like this.
Posted by Steve Kopian at June 23, 2012