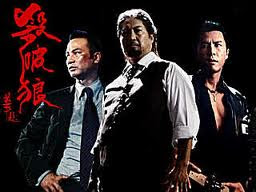 When SPL aka Saat po long aka Kill Point came out word on the street was really good. It seemed the action In the film was top notch and everyone was talking about Sammo Hung’s return to the screen in a full bore bad guy role. It was supposed to be a mean and nasty role that could change the course of his career into a villainous mode.

I picked up an import version of the film and really enjoyed the hell out of it. The film was just as everyone said, great action and a killer role by Sammo. The film also offered a star making role by Donnie Yen. Yes Yen had been making films for years, yes he had some great roles in films like Dragon Inn, The Iron Monkey Films, or Hero, but to me, SPL (er Kill Point) he seemed to be experiencing  the moment where he suddenly moved up into movie superstardom. Sseriously, somewhere in his climatic and bloody battle with Sammo Hung he stepped up to the top tier of Hong Kong action stars. I’m guessing the reason was how well Yen stood up to the force of nature in Sammo.

The plot of the film has good cop Simon Yam going after bad guy Sammo Hung. When, through a long chain of circumstances (trust me it’s too complex to explain briefly), Yam is injured and discovered to have a brain tumor Donnie Yen is brought in to take over the investigation. The battle between cops and robber heats up and eventually explodes as the questionable methods used by both good guys and bad guys come back to haunt them.

While the complex, and frankly soap opera like, plot lifted the film up from many other mindless action films released at about the same time, it was very much the action that made the film stand out. I think every one of the action sequence are top notch, there isn’t a bad one in the lot. Additionally because of the complexity of the story the fights carried weight. We know people get hurt and we fear for the people we like as a result.

Striding through the film are the two stand outs, Sammo and Donnie. Sammo with his seemingly ever present golf club is a scary scary guy. Donnie on the other hand is a kick ass cop with a flair for inflicting damage. When the pair square off in the incredibly violent conclusion both are left bruised and broken both physically and emotionally (because they don’t realize what they set in motion).

If you’ve never seen it you should, if you have you should see it again. If you live in New York you should go see it at the New York Asian Festival when it screens because Donnie Yen will be in the house.
Posted by Steve Kopian at June 30, 2012